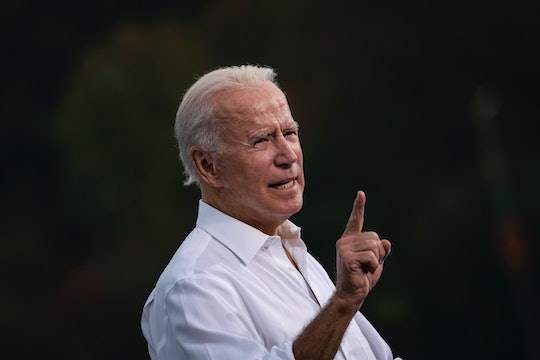 In a new campaign ad, former Vice President Joe Biden has promised to reunite immigrant children separated from their parents under President Donald Trump's "zero tolerance" immigration policy. Biden's latest campaign promise comes roughly a week after court documents revealed authorities had still not located the parents of 545 children pulled from their families at the U.S.-Mexico border as part of a 2017 pilot program run in El Paso, Texas.

"Nearly three years after Trump's order, over 500 children are still not back with their parents," a narrator in Biden's ad said. "On his first day as president, Joe Biden will issue an Executive Order creating a federal task force to reunite these children with their parents."

A court-ordered joint status report filed earlier this month by the U.S. Department of Justice and the American Civil Liberties Union (ACLU), revealed that while authorities had located 485 children's parents, the parents of another 545 children had not been found. What's more, lawyers reported they believed two-thirds of those parents had already been deported back to their country of origin while their children remained with foster families or distant relatives in the United States.

Lee Gelernt, deputy director of the ACLU Immigrants' Rights Project, told NPR many of these children have been separated from their parents for roughly three years.

Biden has been openly critical of Trump's family separation policy, going so far as to characterize it as criminal during the Oct. 22 presidential debate. "What happened?" a transcript from that debate quoted Biden as having said in reference to the policy. "Their kids were ripped from their arms and separated and now they can not find over 500 sets of those parents and those kids are alone, nowhere to go. It's criminal."

At that same debate, Trump defended his administration's reunification efforts, claiming the problem was that many of this children didn't actually cross the border with their families. "A lot of these kids come out without the parents," Trump said. "They come over through cartels and through coyotes and through gangs." The president also argued that children were "so well taken care of" at detention facilities and that those facilities "were so clean."

Immigration attorneys who visited a Clint, Texas, detention center housing migrant children in June 2019, however, described the conditions as "appalling" in an interview with The Atlantic. "An overwhelming number of children who I interviewed had not had an opportunity for a stable shower or bath since crossing the border [days or weeks earlier]," Elora Mukherjee, director of Columbia Law School's Immigrants’ Rights Clinic, told The Atlantic. "They were wearing the same clothing that they had crossed the border in. Their clothing was covered in bodily fluids, including urine and breast milk for the teenage moms who are breastfeeding."

Biden's promise to establish a federal task force focused on the reunification of migrant families, comes as part of the former vice president's last push to win over voters ahead of Election Day on Nov. 3.