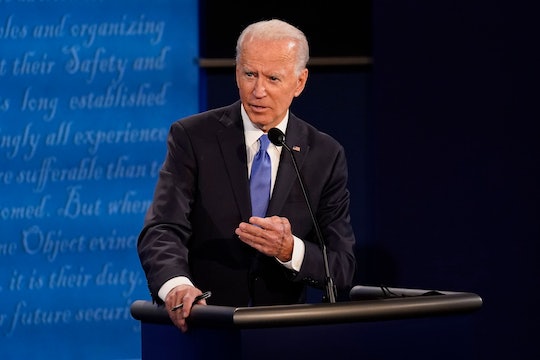 Joe Biden Reminds Families He Believes Health Care Is A Right, Not A Privilege

President Donald Trump and former Vice President Joe Biden sparred over health care in Nashville, Tennessee, on Thursday at the final debate in the 2020 presidential election. As Trump reiterated his vow to terminate the Affordable Care Act (ACA) implemented under the Obama administration, Biden's debate remark on health care was the reminder families needed to hear.

"The difference between the president and I is I think health care is not a privilege, it's a right," Biden said Thursday. "Everyone should have the right to have affordable health care."

Biden then went on to address voters directly, asking, "How many of you at home are worried and rolling around in bed tonight wondering what in God's name you're going to do if you get sick because you've lost your health insurance?"

In a nod to how the ACA's was nicknamed Obamacare, Biden jokingly called his health care proposal "Bidencare" at Thursday's debate. It promises to build on the protections laid out in the ACA by giving people more choice through a public health insurance option like Medicare and continuing to reduce costs.

Under his health care plan, Biden has also vowed to lower premiums and expand coverage access by increasing the value of tax credits and offering premium-free access to a public insurance option to people living in states that have refused to expand Medicaid eligibility. It also includes a number of proposals to lower prescription drug costs and codify Roe v. Wade into law.

"Joe Biden believes that every American — regardless of gender, race, income, sexual orientation, or zip code — should have access to affordable and quality health care," a message on his campaign website reads. "Yet racism, sexism, homophobia, transphobia, and other forms of discrimination permeate our health care system just as in every other part of society."

On Thursday, Biden accused Trump of having been all talk and no action when it comes to health care. "He keeps talking about it," Biden said after briefly outlining his plan. "He hasn't done a thing for anybody on health care, not a thing."

Days before Thursday's debate, Trump told 60 Minutes reporter Lesley Stahl he had a "fully developed" health care plan but refused to disclose any details. "It's going to be announced very soon, when we see what happens with Obamacare," Trump said, referencing a legal challenge to the ACA set to come before the Supreme Court later this fall.