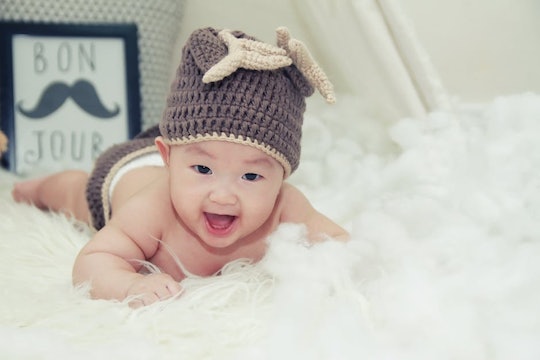 Research Proves Bilingual Babies Are Even Smarter Than You Thought

If there is one universal truth in the world, it is this: Babies are perfect. Totally and completely, undoubtedly perfect. OK, OK, so they poop and cry a lot, that's fine! They're also insanely sweet, cute, and innocent. And now, there's even evidence that babies are actually a lot more capable than you might think. Yes, according to new research, bilingual babies are even smarter than you already thought they were — and that's seriously awesome.

Earlier this week, Princeton University released a new study, aptly titled, "Bilingual babies listen to languages — and don’t get confused," which proves just this point. According to the study, "bilingual infants as young as 20 months of age efficiently and accurately process two languages." So, basically, when a baby learns two languages at the same time, it isn't confusing to them — it's helpful. And they don't just recognize words in different languages, they know that they're two different words.

Casey Lew-Williams, an assistant professor of psychology is also the co-director of the Princeton Baby Lab, and one of the study's authors. According to him: "They do not think that ‘dog’ and ‘chien’ [French] are just two versions of the same thing. They implicitly know that these words belong to different languages."

According to Scary Mommy: "Researchers in the study gathered two sets of 24 French-English bilingual infants and adults to study language learning patterns." The participants then listened to a few words and phrases in their two languages, either together or separate, or, in some instances, mixed together. After that, "the researchers then used eye-tracking measures, such as how long an infant’s or an adult’s eyes remained fixed to a photograph after hearing a sentence, and pupil dilation," according to the study.

Basically, the study sought to discover if knowing two languages would be too stressful for one individual, especially an infant. However, their results shocked them. On top of discovering that babies do, in fact, differentiate between two languages, researchers also uncovered the simple fact that babies listen to us.

Lew-Williams concluded the study by saying: "We believe that everyday listening experience in infancy — this back-and-forth processing of two languages — is likely to give rise to the cognitive advantages that have been documented in both bilingual children and adults."

So, yeah. Babies have a lot more potential than we give them credit for. And while, of course, not every baby will be raised to be bilingual, those who are will definitely have a few advantages later on in life.