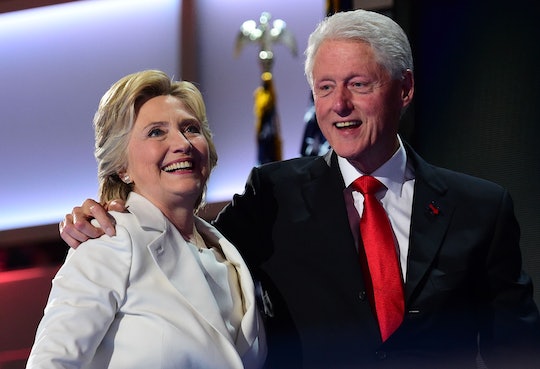 It's been a strange campaign season. Now that Democratic nominee Hillary Clinton is taking a few days off to recover from pneumonia, the conversation about a candidate's health is bound to be the center of political discourse about what it means to be the Commander in Chief of the United States. In an attempt to explain the problem and shoo away pesky inquiries into his wife's 2016 bid this week, former President Bill Clinton defended Hillary Clinton's health — but unfortunately, sort of just made things worse.

In an interview with CBS's Charlie Rose, Clinton tried to come to his wife's defense after Rose suggested that her "overheating" and near-collapse was a sign of some greater health issues. The former president explained that it wasn't a big deal — because it had happened before. "Because frequently — well, not frequently, rarely — but on more than one occasion, over the last many, many years, the same sort of thing happened to her when she got severely dehydrated,” he said.

Oh, Bill. He thought he was doing a good thing, but his verbal stumble might have made his wife's stumble on her way out of a 9/11 memorial on Sunday morning look just a little bit worse. The former Secretary of State said she felt overheated, left, and then it was later revealed that she had not disclosed a pneumonia diagnosis for two days. That instinct to remain private, along with her husband's disclosure that she feels a little woozy sometimes, isn't helping to convince voters that the Democratic nominee for president is the most transparent.

There might not be some insidious reason for not disclosing her pneumonia. For the past few weeks, Donald Trump's campaign had been drumming up interest in Clinton's health. Admitting weakness (or a real reason for a whooping cough) is hard for a woman running for a traditionally male job (or even just admitting weakness in general). What Bill seemed to want to say was that it was NBD — his wife apparently is accustomed to "powering through," as her campaign put it and work herself into the ground — even at the risk of burn out or a weakened immune system.

If anything, it shows that Clinton isn't great at taking care of herself. She probably needs to sleep more, eat better, and even just drink more water while working literally 24/7 on running her campaign. A recent Politico story revealed that her campaign staff often has to fight with her about drinking enough water to stay hydrated.

How many women have gone to work when sick, taken care of children all night while sick, gone to a job interview with a cold because there's no time to reschedule or look flaky, or forgotten to eat lunch, let alone drink eight cups of water in a day, because they were just too busy? Trump doesn't seem to get it.

It's not a thing we pay attention to in males. We should. If Clinton is unhealthy because she didn't drink enough water and caught viral pneumonia on the campaign trail, it's fair to ask how healthy Donald Trump is since he allegedly eats only McDonald's when he's traveling. Let's ask President Obama if he's ever felt a little lightheaded or exhausted while doing his thing. He seemed to know a lot about "bending knees" to keep from fainting in Philadelphia on Tuesday afternoon.

What Bill was trying to say, it seems, is that it's no surprise to him that she's let some basic nutrition slide while working her butt off. That could be admirable or plain stupid, depending on your perspective. Instead of hiding the fact that she was working while sick, it might be a good campaign move to talk about how all women (and most Americans) are trained to work in any condition.

But with Hillary sick in bed and Trump on every cable news channel talking about it, Bill Clinton might want to check his talking points if he plans on helping his wife's poll numbers.