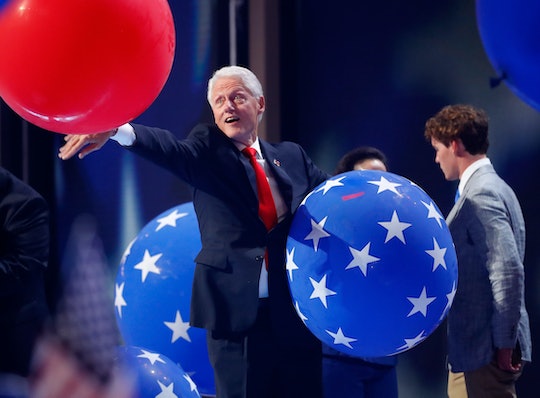 The delight was palpable in Philadelphia on Thursday night as the Democrats completed their convention. Bill Clinton playing with balloons after Hillary’s nomination is everything you need to decompress from such a wound-up and rigid week. All politicians on stage looked like they just couldn't believe this was happening to them — and luckily the internet served up the GIFs immediately, laced with fitting Twitter-commentary. Though the RNC ironically followed up its candidate's final address with the Rolling Stones' "You Can't Always Get What You Want" blasting over its speakers, the DNC opted to play upbeat pop instead, in line with the various musical performances present during the convention.

Hillary Clinton's speech detailed what has led her to seek this office, reiterated her career-long fight for healthcare and children's rights, and took aim at her competition's incompetencies, both professional and temperament-wise. There were plenty of instances that earned standing ovations and applause, such as when she stated, point-blank: "I believe in science." Roars and claps were also heard when she warned, of the RNC nominee: "A man you can bait with a tweet is not a man you can trust with nuclear weapons." Another line that got major love? "I'm not here to take away your guns." She continued this idea further, saying: "I just don't want you to be shot by someone who shouldn't have a gun in the first place."

The following GIFs, photos, and tweets show just how thrilled Bill Clinton and plenty others were, not only to begin the final battle to elect Hillary Clinton president, but to, well, play with the all the red, white, and blue balloons.

For a convention that's had such dire expectations, it was nice to see the speakers not only unwind, but also appear to be enthusiastically enjoying themselves, specifically the potential new First Man of the United States. Bill Clinton's speech on Tuesday worked to frame his wife as not only a steadfast, competent, lifelong public servant, but also as a mother and partner who he's continued to admire since their very first meeting. His final plea implored voters: "Hillary will make us stronger together. You know it because she spent a lifetime doing it. I hope you will do it. I hope you will elect her." After the chaos that led up to the convention, and the uproar and dissent that even continued to permeate the week, both Clintons found joy on that stage Thursday night: One because her message was heard and accepted, and the other because, I mean, balloons.