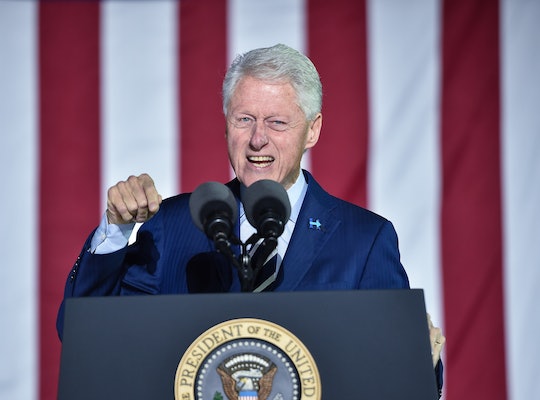 Bill Clinton Says Trump Got "Angry, White Men" To Vote For Him, & He's Not Wrong

Bill Clinton got to the White House by being a tough politician who knew how to rally southern, white voters for the Democrats, something his wife, former Secretary of State Hillary Clinton couldn't manage to do in 2016. Following his wife's loss to Donald Trump, President Clinton has been relatively quiet, letting the post-election headlines about hacking and Russian influence in the election go by without his comment. But in a recent newspaper interview Bill Clinton said Trump got "angry, white men" to vote for him, and if you look at the post-election voter breakdown, he isn't wrong (even though he's throughly upsetting many a Trumper on Twitter).

It was inside a small bookstore not far from the Clinton's Chappaqua, New York, home that Bill Clinton gave some pretty choice quotes to the local newspaper, the Record-Review, according to Politico.

In addition to the "angry, white men" bit, Bill also accused FBI Director James Comey of rigging the election against Hillary , saying of his letter to Congress less than two weeks before the election, "you would need to have a single-digit IQ not to recognize what was going on," Politico reported.

It's understandable that Bill would still be emotionally raw following his wife's stunning defeat, but if you take a look at the voters who turned out for Trump, Bill isn't wrong.

According to Pew Research, Trump won white voters by more than 20 percentage points. Trump also won men by a 12-point margin, according to Pew — the widest gender gap since 1972.

And when it comes to assessing the anger level of Trump supporters, Trump himself acknowledged it at a recent post-election "Thank you" rally in Orlando, Florida, according to the Washington Post:

You people were vicious, violent, screaming, 'Where’s the wall?' 'We want the wall!' Screaming, 'Prison!' 'Prison!' 'Lock her up!' I mean, you were going crazy. You were nasty and mean and vicious. And you wanted to win, right?

But now that's he's won, Trump is trying to turn down the heat on the rage that fueled his rise. "It’s much different. Now you’re laid back, you’re cool, you’re mellow, right?" he continued in Orlando. "You’re basking in the glory of victory.”

Kathy Kramer, a political science professor who has been studying the Wisconsin electorate for years, told the Washington Post that the rise of white rage in the electorate is the result of three things that white people want but don't feel like they're getting from government: power, money, and respect. Kramer told the Post about Trump supporter's growing anger:

It’s just been harder and harder for the vast majority of people to make ends meet. So I think that’s part of this story. It’s been this slow burn.

The question, now that Trump has leveraged that sentiment to get elected, is whether he can, or will, do anything to help the people who voted for him or whether that rage will eventually turn toward him. Either way, Bill wasn't wrong — even if his comment wasn't said in the most tactful or filtered way (something Trump supporters should be able to appreciate).