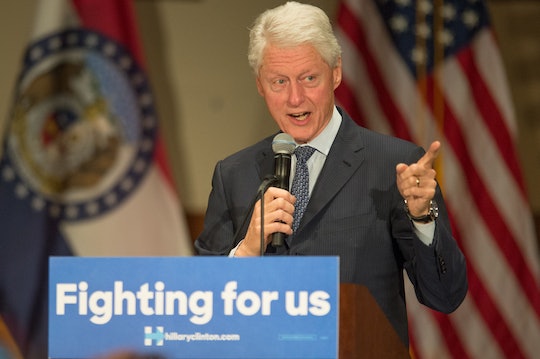 In 1994, then-President Bill Clinton signed the Violent Crime Control and Law Enforcement Act into law, a move that contributed to the disproportionate mass incarceration of black Americans for nonviolent crimes. His wife, Democratic presidential hopeful Hillary Clinton, referred to gang members "super predators," in a 1996 speech, a remark she recently said she regretted. But at a campaign event in Philadelphia Thursday, in an extended, heated exchange, the former president defended both his wife's rhetoric and the crime bill to a small group of vocal activists — and Clinton's comments to those Black Lives Matter protesters were definitely not okay.

Clinton sparred with the protesters after they began heckling him during his speech, holding up signs displaying sentiments like "CLINTON Crime Bill Destroyed Our Communities."Although his wife Hillary has been relying on her ability to garner the support of African American voters to win the presidency, former President Clinton aggressively defended the former Secretary's "super predators" remark, which many believed was racially insensitive and used to dehumanize black youth (Clinton also said at the time that young gang members needed to "be brought to heel").

"I don't know how you would characterize the gang leaders who got 13-year-old kids hopped on crack and sent them out on the street to murder other African American children," Clinton said, according to video of the event taken by ABC News. "Maybe you thought they were good citizens. [Hillary] didn't."

The fact that the Bill Clinton is doubling down on the 1994 crime bill is problematic. The bill mandated a sentence of life in prison for anyone convicted of a violent felony after two or more prior convictions, including drug crimes. As a result, by 2014, 6 percent of black men in their thirties were in prison — a rate six times higher than white men of that age, according to the NAACP database.

By fervently defending his role in the mass incarceration of African American men, Clinton wrongfully absolves himself from recognizing the role he played in the effect this had on the black community, no matter how he tries to excuse it.

For his part, Clinton has said previously that the measures in the crime bill increased the number of police officers on the streets as well as enacted drug control legislation that was lacking. Still, he admitted last year at the annual NAACP meeting that the bill may have made the problem worse. If nothing else, it seemed that he was at least aware the bill was far from perfect.

"In that bill, there were longer sentences," Clinton said at the time. "... That was overdone. We were wrong about that."

Research has since shown that mass incarceration doesn’t cut down on crime rates. Instead, black babies born in 2014 had a one in three chance of spending time in prison, according to a study conducted by prison reform advocacy group, the Sentencing Project.

Bill Clinton's disastrous crime bill was an experiment in how to prevent crime that largely failed, and wreaked havoc on the African American community in the process. Instead of owning up to his mistakes and offering solutions, Clinton showed an unwillingness to confront racism this week, when he sparred with frustrated Black Lives Matter protesters using aggressive and dismissive language. If Hillary Clinton wants the support of black Americans, she may want to rethink her campaigning strategy.