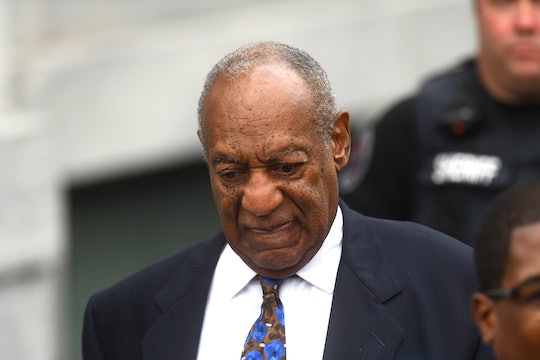 The verdict is in. Bill Cosby is facing 10 years in prison after a judge deemed him a "sexually violent predator," according to Page Six. This was established during the second day of his sentencing hearing, and the designation comes with lifelong notification and counseling requirements, USA Today reported Tuesday, Sept. 25.

UPDATE, 2:30 p.m. Eastern: Cosby has been sentenced to three to 10 years in state prison, The Chicago Tribune reported. He did not make a statement in court when given the opportunity, according to the BBC.

Judge Steven O'Neill has ruled that Cosby is a "sexually violent predator," and he will be put on the sex offender’s registry that is sent to neighbors, schools, and victims, according to The Independent. The actor, now 81, was convicted back in April on three counts of aggravated indecent assault against Andrea Constand at his home in Philadelphia in 2004, the outlet reported.

Dr. Kristen Dudley, a psychologist who is a member of Pennsylvania’s Sexual Offenders Assessment Board, testified Monday that Cosby meets the criteria of being a sexually violent predator following her review of police reports and trial transcripts, according to USA Today.

During Cosby's court appearance, Montgomery County District Attorney Kevin Steele asked Cosby whether he understood the implications of the label, questioning if he understood that he'll have to register with the Pennsylvania state police for the rest of his life. Cosby responded "Yes," Page Six reported.

Prosecutors are asking for a prison sentence for Cosby of between five to 10 years, according to NBC affiliate WRAL-TV. But his lawyers are seeking house arrest for the comedian instead, claiming the legally-blind actor is too frail for jail.

O'Neill is expected to announce Cosby's sentence around 1:30 p.m. Eastern time. That's when survivors and supporters alike will know whether Cosby is going to jail for his crimes. In the case of Constand, who wrote a five-page letter to the judge, she wrote that, "Bill Cosby took my beautiful, healthy young spirit and crushed it. He robbed me of my health and vitality, my open nature, and my trust in myself and others," USA Today reported. She testified in the case, and is one of several women awaiting Cosby's criminal fate.

Following Cosby's "sexually violent predator" designation, and before Cosby's sentencing, survivors and other social media users reacted to the development on Twitter and elsewhere.

And @CP91_ on Twitter was apparently not convinced by the "frail" argument in regards to Cosby. She wrote before the second day of sentencing, "And Bill Cosby returns back for Day 2 of sentencing tomorrow. Dementia or not he needs jail time just like any other rapist."

Cosby has been accused of drugging and molesting "some 60 women," Page Six noted. On Monday, the first day of the proceedings, Constand and others who say Cosby assaulted them, including model Janice Dickinson — one of five other accusers who testified during his retrial — were present, USA Today reported.

When Cosby was found guilty on three counts of aggravated indecent assault in April, several of his accusers reacted to the news. Janice Baker-Kinney, a bartender who testified against Cosby in court, wrote that she was "overwhelmed with joy, relief and gratitude," USA Today reported at the time. She continued:

...this victory is just the beginning for many of us, to fight for justice, to do the right thing and support every person who has ever been shamed and humiliated and blamed.

And during a news conference after the guilty verdict was announced, Lili Bernard — a former actress who says Cosby drugged and raped her when she was on a 1992 episode of The Cosby Show as a guest star — said it was "a victory for womanhood and it is a victory for all sexual assault survivors. Female and male."

There were definitely very strong reactions to the Cosby court proceedings and to him being deemed a "sexually violent predator." And there will likely be many more once his sentencing is handed down. Through all the noise, the most important thing in the lead-up to Cosby's sentencing is that survivors of sexual assault and abuse continue to feel heard and supported.