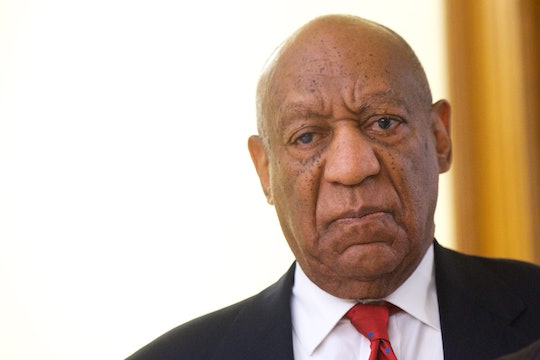 After over two years of trials, investigations, and tales of survivors, Bill Cosby has been found guilty of sexual assault by a Montgomery County jury, The New York Times reported on Thursday. Cosby faces up to 30 years in prison for sexually assaulting Andrea Constand in 2004, although numerous other women have accused the comedian of similar abuse, according to The New York Times. Romper's request for comment from Cosby's legal team was not immediately returned.

This final sentencing of Cosby has been a long time coming, as the 2017 trial focusing on the 2004 incident ended in a mistrial, The New York Times reported. At the time, Vox reported that the "jury told Judge Steven T. O'Neill they were deadlocked," and a resolution couldn't be found. As such, the nearly 60 women who have accused Cosby of alleged assault or misconduct had to continue to wait. When Cosby's trial went back to court, according to The Washington Post, his defense team described the trial as being on the same level as "witch hunts, lynching and McCarthyism."

Now, the trial has come to a close and Cosby's sentencing could potentially result in a 30-year prison sentence. According to The New York Times, each of Cosby's three counts of felonies is "each punishable by up to 10 years in state prison, though the sentences could be served concurrently."

Although dozens of women accused Cosby of assault, only Constand's accusations resulted in a trial. According to The New York Times, Cosby was accused of "penetration with lack of consent, penetration while unconscious, and penetration after administering an intoxicant." Constand initially accused Cosby of assaulting and drugging her back in 2005, just a year after the alleged incident occurred, Vox reported. However, Cosby then settled with Constand in 2006 for an undisclosed sum, according to a report from People.

More women later came forward with similar allegations against Cosby and Constand's case was then brought up again, as it was one of the only ones where the statute of limitations was not yet reached. As Vox reported, "In December 2015, as the 12-year statute of limitations was set to expire, prosecutors charged Cosby with three counts of aggravated indecent assault. The case went to trial in summer 2017." As previously mentioned, that 2017 case ended in a mistrial.

Throughout both trials, The New York Times reported that Cosby and his defense team have maintained that "his encounter with Ms. Constand was part of a consensual affair, not an assault." However, Constand's testimony told quite a different side. Speaking to the jury, Constand explained that at the time of the incident, she was invited over to his house and he reportedly gave her "three blue pills," according to The Guardian, which Cosby allegedly said were simply to "take the edge off."

Then, Constand passed out on the couch and told the jury what else happened, per The Guardian. "I felt Mr. Cosby on the couch behind me, and my vagina was being penetrated quite forcefully, and I felt my breasts being touched," she reportedly said. Constand also told state prosecutor Kristen Feden that she wasn't strong enough to stop Cosby.

After Feden asked Constand if she told Cosby to stop, she replied, "I wanted it to stop. I couldn't say anything," according to CNN. Constand continued, "I was trying to get my hands to move, my legs to move and the message just wasn't getting there. I was weak, I was limp and I couldn't fight him off."

After years of allegations and trials, a verdict has been reached and the 80-year-old former actor and comedian could spend decades in prison.