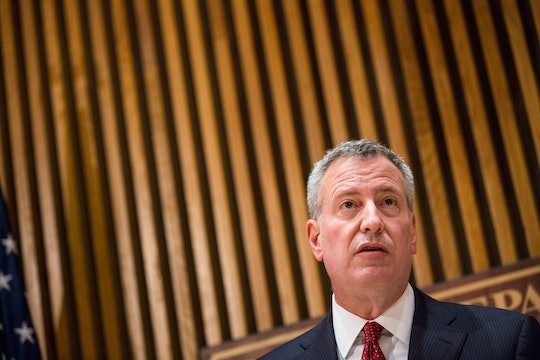 While you were spending your weekend Netflix and chilling, riding the wave of emotions that comes with a third Friday Night Lights binge-watching session (just me?), New York City Mayor Bill de Blasio was also enjoying an emotional roller coaster of a weekend. Starting off the weekend Friday with a Morning Joe appearance on MSNBC that finally — finally! — led to de Blasio endorsing Hillary Clinton, the mayor was making headlines for all the right reasons, until he spent Sunday night broadcasting his love on Twitter for the Red Sox... during the Mets World Series game... that the Mets lost.

Let's start with de Blasio's first ringing endorsement — of Clinton, whose ties to New York (as its former senator) and de Blasio's own party made an endorsement seem obvious and inevitable. But de Blasio has surprised us before — after all, we're talking about a man who eats pizza with a knife and fork. In fact, de Blasio's endorsement of Clinton is only surprising because of how long it took for him to get there. In April, during a Meet the Press airing, de Blasio refused to outwardly back Clinton, instead saying he needed to "see a vision," before making a decision. Apparently, it took six months for him to see that vision, and on Friday, de Blasio finally endorsed the obvious candidate:

"The candidate who I believe can fundamentally address income inequality effectively, the candidate who has the right vision, the right experience, and the ability to get the job done, is Hillary Clinton," de Blasio said.