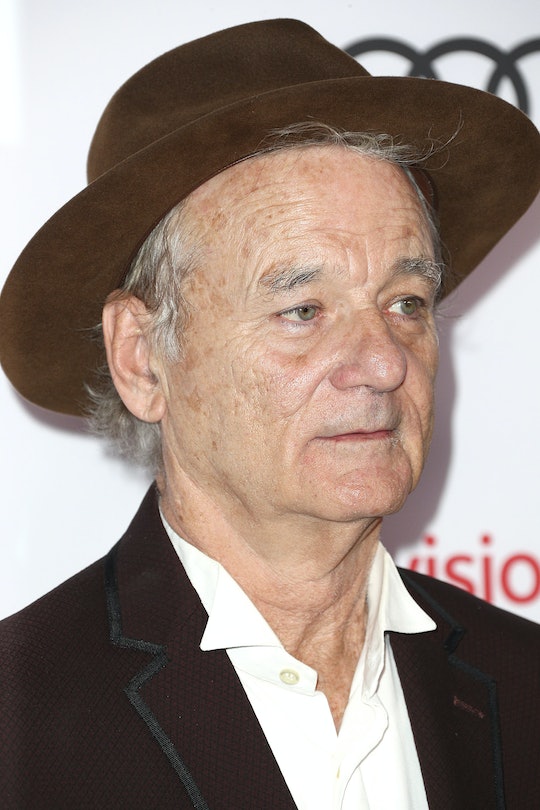 Bill Murray Took On His Most Frightening 'SNL' Portrayal Yet

For as long as Saturday Night Live has been spoofing the Donald Trump presidency (which honestly seems like forever at this point) former White House Chief Strategist Steve Bannon has been portrayed as a cloaked Grim Reaper, but finally on Saturday the show revealed who's been Bannon all along. Bill Murray appeared as Steve Bannon on SNL and Twitter loved it. Because who doesn't love Bill Murray?

Somewhat less beloved, however, is Bannon, who recently stepped down from his position at Breitbart News following the publishing of the book Fire and Fury: Inside the Trump White House by Michael Wolff. So far on Saturday Night Live, Bannon had always just been spoofed as a hooded Grim Reaper without ever showing his face during any of the skits. However, all of that changed on Jan. 13's cold open, in which the hood was finally let down. And low and behold, who should appear but none other than Murray, beloved actor, folk hero, and distinguished SNL alum. It turns out that Murray is the perfect person to imitate Bannon, down to his crumpled jackets, signature skin look, and hubris. And clearly, the internet agreed because Twitter couldn't get enough of this opening skit.

The cold open reprised the show's spoof of the popular morning show Morning Joe, one of the most consistently hilarious bits the show has done lately. Kate McKinnon and Alex Moffat revived their pitch perfect impressions of the show's hosts, Mika Brzezinski and Joe Scarborough, addressing their viewers to talk about Wolff's book.

In another surprise guest appearance, former SNL cast member Fred Armisen showed up to play Wolff discussing the book. "Is this true," McKinnon's Brzezinski asked, to which Armisen's Wolff shrugged while stating:

You liked it, you had fun? So what's the problem. You got the gist, so shut up. Even the stuff that's not true is true.

It should be noted that Trump's lawyers sent the publishers a cease and desist letter, saying that the book contains 'false/baseless statements," which is what made Armisen's retorts so perfect. In fact, Armisen's cameo would have been the most exciting thing about this sketch until Murray showed up. And together they managed to make comedy magic. It was nothing short of awesome.

Now that Bannon is no longer in the White House, some people might be wondering what he's up to these days. So in his impression of the former Trump advisor, Murray decided to update everyone on his big plans these days. According to Murray's Bannon, he's "working on a web series for Crackle, called Cucks in Cars Getting Coffee."

But the highlight of the skit (at least for me) had to be when Murray got particularly creative with puns and went on to quip: "It's time for America to slide down the Bannon-ster." (Please don't have this be the new "Make America Great Again.") In a perfect deadpan, Murray also said that "I'm also coming out with a line of wrinkled barn jackets, called 'Frumpers', for guys." And there's more. "Spring time — skincare line, 'Blotch.'"

When McKinnon's Brzezinski asked if Bannon could ever get into politics again, Murray confidently replied, "Yes, and on 'The Cannon's' terms, too." Repeatedly calling himself "The Kingmaker," Murray made the point that he convinced the country to elect "Donald" and he could do it again. Did anyone else just get chills?

Regardless, Murray's impression was hands down the hit of the night. Can this be a regular thing, Saturday Night Live? Please? I think we all want more.

More Like This
Another Rainbow Appeared On The Eve Of Queen Elizabeth’s Funeral
10 Kid-Friendly Halloween Episodes From TV Shows Your Little Vampire Already Loves
Khloé Kardashian Reveals Tristan Thompson Proposed To Her Last Year & Why She Said No
'The Proud Family: Louder & Prouder' Is Returning For Season 2 On Disney+