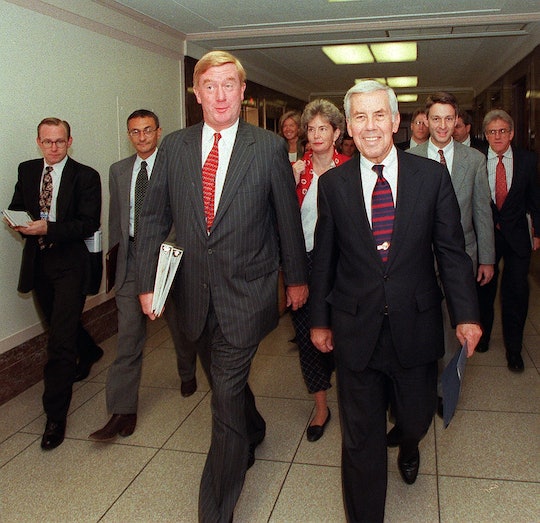 Though it's been known that Johnson was looking for someone to run as his vice president, the announcement came as a surprise to many within the Republican Party, which Weld has been an active member of for many years. According to the Boston Globe, this development came as a shock to Weld's "protégé," current Massachusetts Gov. Charlie Baker. This announcement is further indication of the internal turmoil currently wracking the Republican party since Trump's rise to the position of presumptive nominee.

As for Weld's history as a statesman, he was elected to the position of governor in 1990 and served from 1991 to 1997. During his time in office, he was wildly popular. He was even re-elected by the largest margin in Massachusetts' history in 1994, according to The New York Times.

But, despite that popularity, for many Libertarians he seems an odd choice. During his governorship, he supported strict gun control. The New York Times reported that he "called for a statewide ban on assault weapons [...] as well as a waiting period for buying handguns and a prohibition on handgun ownership by anyone under 21." His proposal also called for the country's strictest penalties for illegal gun sales and crimes. It was a platform reversal for him. To explain that change of heart, he said, "The purpose of this common sense legislation is to remove deadly guns from our streets and to take weapons out of the hands of many teens who themselves are becoming deadly killers."

He also spoke out in favor of affirmative action during his tenure as governor. According to the Washington Post, Weld and a coterie of moderate Republicans took a stand and defended affirmative action to their own party, which for the most part opposed it. They went across the aisle to ensure that programs stayed in place in their states.

Weld was also a staunch supporter of the Environmental Protection Agency and its regulatory work. This set him apart from many Republican governors who favored less federal control. Near the end of his years as governor, he joined forces with another Republican governor, Christine Todd Whitman, to push for stricter limits on smog. According to The New York Times, he also supported the EPA in requiring increased production of electric cars.

As further evidence of his cross-party beliefs, he also supports eminent domain for projects that provide public assets, like affordable housing. The New York Sun reported on his support for such construction projects, and it seems unlikely that he'd shift his opinion on that, despite it running very counter to Libertarian ideals.

Weld had a very successful career as a governor, though when he ran for the Senate, he lost against John Kerry. That may have been because he has never quite fit the mold set out by Capitol Hill Republicans. In that way, he's a great choice for the Libertarian Party, but it will be interesting to see how he justifies many of his long-held, big-government values. As the Boston Globe said, Weld is a "colorful figure who [...] has remained something of an enigma among the state political class." The announcement that he's joining the presidential race is surprising, but surprises are nothing new for Weld.