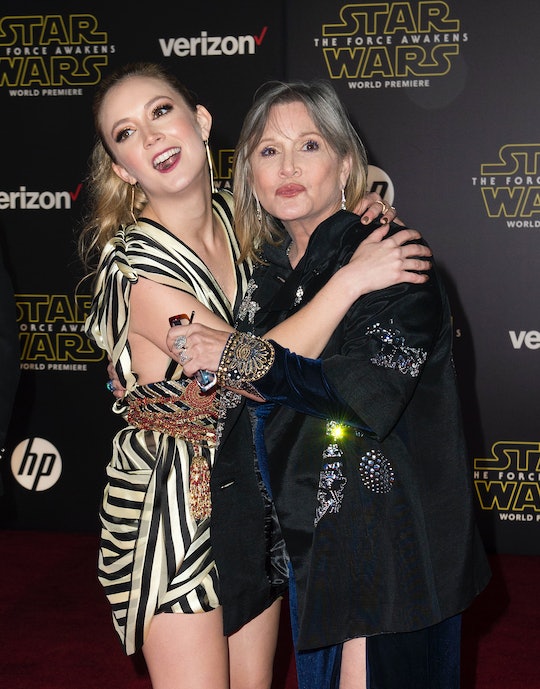 The end of 2016 was, more than likely, not easy for actress Billie Lourd. Shortly after Christmas, her mother — actress Carrie Fisher — died of a heart attack and one day later, her grandmother — actress Debbie Reynolds — died as well. Lourd had been silent in the days following their deaths. But Lourd is breaking her silence — Lourd responded to mom Carrie Fisher's and grandmother Debbie Reynolds' deaths, a little less than a week after they passed away.

Lourd, who is just 24-years-old, took to Instagram on Tuesday to address her the deaths of her loved ones who died with what appeared to be little warning. Lourd posted an old photo of her grandmother and mom, from when Lourd was just a child, to her Instagram account. In the photo, Lourd can be seen sticking out her tongue, with her head resting on her grandmother's shoulder. Fisher hangs out on top of the photo, smiling. The photo is so sweet and paints a picture of normalcy from the celebrity grandmother-mother duo. The photo looks like it could be ripped out of anyone's photo album with pictures of happier times. But in the caption, Lourd wrote about the deaths in her family for the first time.

Lourd wrote in the caption:

Receiving all of your prayers and kind words over the past week has given me strength during a time I thought strength could not exist. There are no words to express how much I will miss my Abadaba and my one and only Momby. Your love and support means the world to me.

Lourd's statement is both sad and touching — serving as a reminder to how much the lives of Reynolds and Fisher meant to so many people out there. Their long careers in movies and writing novels touched a lot of people and their memories will remain. The amount of support given to Lourd during this very sad time proves how much Fisher and Reynolds meant to the rest of the world.

It is understandable why Lourd might need strength during this time. Lourd's uncle, Todd Fisher, told ABC News that he and Lourd were planning a joint funeral for the two actresses, who will reportedly be buried next to each other. According to New York Daily News, Todd said that Billie will inherit "whatever she wants" from her mother. "Carrie wanted that," he said. And in the days after Carrie's death, Todd admired the strength that Lourd would later write about in that Instagram caption, telling New York Daily News, "We're very proud of her. She is handling this with amazing strength."

Our thoughts are with Lourd as she goes through this very difficult time.