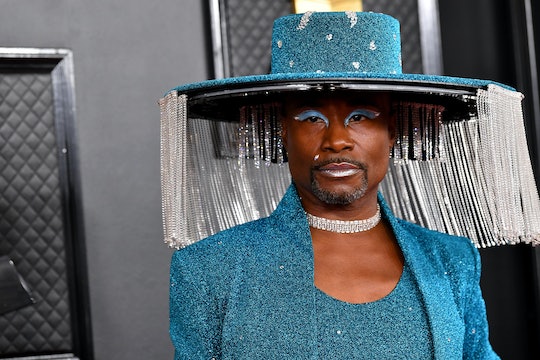 If you tuned in to Sunday's award show solely for the fashion, you weren't disappointed. Billy Porter wore a motorized hat to the Grammys and it was exactly as fabulous as it sounds. Part of a whole look, the hat was teal, tasseled, and capital-T terrific, with a mechanical design that whisked the crystal fringe closed over his face any time he needed to lay down a firm "NEXT," like a bank teller going off duty, to those pointing their cameras at him. Along with looking more amazing than any single hat has the right to, this motorized accessory has quite the backstory.

"This design is a great compromise. It's a reveal," Porter told Vanity Fair ahead of the event. "The crystal curtain stays open, unless you get on my nerves and then I can shut you right out!"

Porter and his stylist, Sam Ratelle, developed the hat with the help of designer Scott Studenberg after being inspired by a star who shares Porter's own name: Billie Eilish. Ratelle told Vanity Fair how the stars' interaction led to the magic that is the hat. "Billy and Billie Eillish had a beautiful moment on the red carpet at the [American Music Awards] where they both gushed over each other's hats. Billie was wearing a Victorian inspired beekeeper bonnet with netting covering her face. After the event, Billy jokingly told me he loved her look but after 30 years of working his way to Hollywood, ‘y'all are gonna see my face!'"

Even if he wins best dressed at most of the events he attends, Porter insists that he doesn't dress to top anyone — including his own past looks. It's all about self expression. As much as he has always loved fashion, he told Vogue in 2019 that he grew up feeling as though “there was a limit to the ways in which [he] could express [himself].” But he has been pushing back on those limits ever since.

“When you’re black and you’re gay, one’s masculinity is in question. I dealt with a lot of homophobia in relation to my clothing choices,” he said. “I was trying to fit in to what other people felt I should look like.”

It's safe to say that Porter's hat stole the show, at least if Twitter is any indication. "Billy Porter’s hat is motorized and spins the tassels around? ABSOLUTELY," one person tweeted. "What if Billy Porter closes the shade hat during someone's performance tonight?! It would be the ultimate shade shade!" said another. And honestly, that would probably make my entire decade.