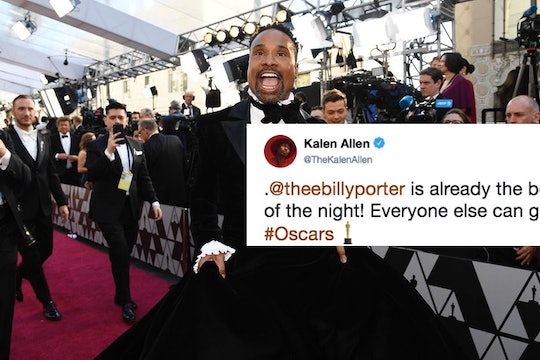 History was made at the 91st Academy Awards within moments of the fanfare starting. In case you missed it, Billy Porter wore a tuxedo gown to the Oscars, changing expectations on what men can bring to the red carpet forevermore. Porter's look helped to usher in the new era of fashion in Hollywood where men can experiment with their clothes just as much as their female counterparts. And based on fan reactions on Twitter, it was the fashion moment of the night as soon as the star arrived. Seriously, everyone else might as well have gone home.

OK, let's back up a few steps. The POSE actor announced he was attending the mother of all awards show as a fashion commentator for 2019 and then hinted at the bold look he would be serving via Twitter the day before the Oscars red carpet. The actor coyly wrote to his followers, "...and just wait until you see what I'm wearing," building anticipation for the big reveal. Porter didn't disappoint once he unveiled his look, arriving in a custom Christian Siriano velvet tuxedo gown that had his fans shook, according to Page Six.

A tuxedo gown is exactly what it sounds like: The gown looks like a traditional suit on top (with the addition of ruffled sleeves because gotta keep it #fashion), but the piece then flows into a stunning full black ball gown below the hips. Siriano tweeted his support of his creation within moments of Porter arriving at the Oscars, saying the actor was "shutting the carpet down," and I have to agree.

I mean, come on. The dress fit the actor like a glove, and the gender fluid look was a welcome change from more traditional (read: boring) looks men usually arrive in at red carpet events. But as Vox reported, gender neutral fashion has been on the rise in Hollywood, particularly at the 2019 awards shows. Indeed, gone are the days of typical suits; instead, male stars have been showing off more elaborate and bold choices, from Timothée Chalamet's sequined black bib (that looked like a harness) at The Globes to Cody Fern's combo suit dress, also at The Globes, according to Vox.

Porter actually showed off a custom Randi Rahm floral tuxedo with matching pink cape at the Golden Globes earlier this year, as reported by Harper's Bazaar, so his fashion momentum really built to the Oscars.

Porter's Golden Globes look was met with cheers from fans and fashionistas alike, and they only had more excitement for his Oscars' look. He took to the red carpet with his husband, Adam Smith, who was wearing a traditional tux that went nicely with Porter's gown. Smith wore a similarly simple look at the Globes in January as well.

Tweets supporting Porter's fierce look came pouring in as soon as he hit the red carpet, and the general consensus was that his look was 100 percent going to be the best of the night... even though he was one of the first stars to arrive.

Really, no one else even had a chance in the eyes of internet fans everywhere, with many saying everyone else should just go home because Porter already won the title "Best Dressed."

And others were just in freakin' love with the look and the man wearing it.

Fashion does inspire strong feelings in people, but it's pretty rare for someone to literally want to never see again because a look was so amazing. But I guess if you've seen total and utter perfection, what more could you want to see?