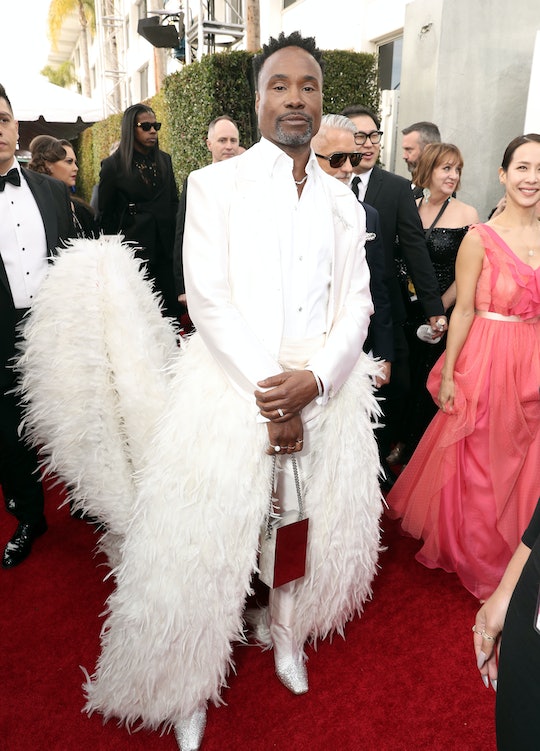 Although the competition might be tough in Porter's category for Best Performance by an Actor in a Television Series — Drama, he certainly won the award for best dressed in his category. Porter's all-white tuxedo with a pristine white feather train served as fantastic contrast to the red carpet. Although everything about the outfit was incredible, perhaps the best thing was the fact that it came with his own personal train holder. Talk about a dream job.

It's safe to say that Porter came dressed to win. His custom outfit (yes, custom) designed by Alex Vinash reportedly took three months to make, which means that it was being worked on before the nominees were announced in early December. During his red carpet interview with Ryan Seacrest, Porter explained the power in his outfit: "This is not a sitting outfit, this is a standing outfit," he said.

It's also an outfit made for walking. Just look at how his train moves down the red carpet.

Porter's confidence shines in the outfit. You could tell that he looked so comfortable and so much like his "authentic self" in the ensemble. But, when his Golden Globes nomination was announced, he told E! News that he didn't always feel this way.

"I am living beyond my wildest dreams, actually," he said. "Interestingly enough, my dream didn't include me being authentic. I thought I had to fix myself to look successful...I never knew I could look like this. So, that is what is really inspiring and fabulous."

Porter's outfit at the 2020 Golden Globes were definitely those two things — inspiring and fabulous.