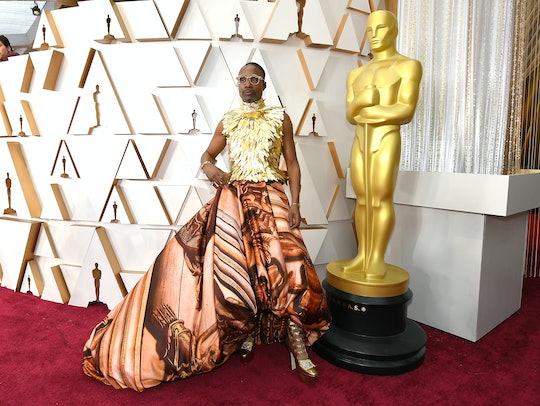 With a reputation for jaw-dropping red carpet looks, it's no surprise that one of Hollywood's best-dressed stars capped of this year's award season at Sunday's 2020 Oscars with an outfit fit for royalty. But did you know that Billy Porter's Oscars look is connected to Kate Middleton and the royal family, thanks to one unique design element? It's true. The designer behind Porter's regal dress was reportedly inspired by Kensington Palace, the lavish royal residence Middleton and her husband Prince William call home.

When it comes to red carpet fashion, there are stars and there are icons. Pose star Porter has quickly proven himself to be the latter, turning out red carpet looks that are both daring and stunning. His red-carpet look for Sunday's Oscars was no exception.

Porter arrived on the red carpet wearing custom couture designed by British fashion designer Giles Deacon that featured a sleeveless, high-necked gold feathered bodice and a billowing printed skirt. But that wasn't just any old pattern printed on Porter's skirt, it was a pattern inspired by military embellishments found within the decor at Kensington Palace.

"The King's State Apartments at #KensingtonPalace provided the inspiration for @theebillyporter's magnificent gown at the #Oscars," Historic Royal Palaces, an independent charity that looks after the Tower of London, Hampton Court, Kensington Palace, Kew Palace, Hills Castle, and the Banqueting House, wrote on Twitter. "Designed by @gilesgilesgiles the gown features Roman military detail found in the Cupola Room, playing with the idea of masculinity and extravaganza."

According to Historic Royal Palaces, The Cupola Room is among Kensington Palace's "most opulently decorated rooms." It was designed by architect William Kent and uses a number of clever, optical illusions such as the steeply curved ceiling to resemble a four-sided Roman cupola, or rounded dome. Although the room featured painted pilasters, gilded statues, a marble chimney, and an 18th century musical clock, it was a more subdued mold of Roman military detail that inspired Deacon and became the pattern of Porter's skirt.

Although Middleton and Prince William don't live within the King's State Apartments, which are open to the public for tours, they do live not too far away in Kensington Palace's Apartment 1A. According to Vogue, Apartment 1A boasts 4 stories and 20 rooms, meaning there's more than enough room for Prince George, Princess Charlotte, and Prince Louis to run around.

And while the inspiration of his lavish Oscar red carpet outfit may have been missed by some, it seems that Porter was well aware of his look's royal connection. "The Category Is: ROYALTY," he wrote when sharing photographs of his outfit on Instagram.