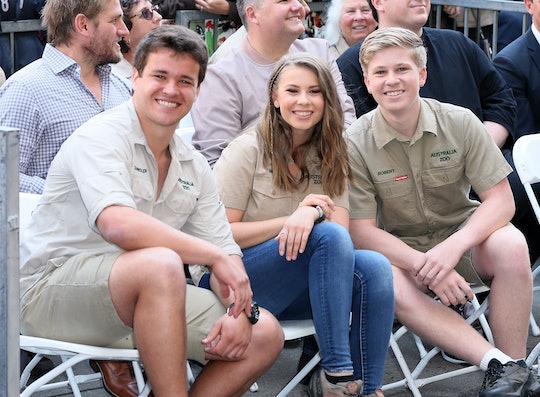 Those who watched The Crocodile Hunter back in the day in the '90s/early '00s were devastated at the news of Steve Irwin's untimely death in 2006. Everyone's favorite, energetic, animal-loving Australian was suddenly gone — and he left behind a wife and two young children who loved him dearly. Fast-forward to today, and his daughter Bindi isn't a little girl anymore. And now that she's engaged, Bindi Irwin wants her brother Robert to walk her down the aisle.

As you might have heard, the Dancing with the Stars champion announced her engagement to longtime boyfriend, Chandler Powell. On July 23, Irwin, 21, shared the happy news with her Twitter followers. "On my birthday I said ‘yes’ & ‘forever’ to the love of my life," she tweeted. "Chandler, close to 6 years ago I fell in love with you & every day since has been a whirlwind of adventure & true happiness. Here’s to a lifetime of friendship, purpose & unconditional love."

Powell also shared the news via social media. "Proposing in her very favorite place in the zoo, surrounded by animals, seemed like the perfect way to embark on this incredible new chapter in our lives," he wrote on Instagram. "Bee, I love you more than anything in this world and I always will. Happy Birthday."

In the days since her engagement, the Crikey: It's the Irwins star opened up to People about one particular detail of her wedding. Traditionally, it's the bride's father who has the honor of walking her down the aisle. Since Steve Irwin can't carry out this duty, however, Bindi has someone else in mind: Her younger brother.

"I think that for me, it'll be really important that Robert walks me down the aisle," she told People. "That's something that I really want to do ... I'm always so grateful that Robert is there, and he has been such a big part of my life and he's always stepped up and been the one to give me a hug when I need it and encourage me forward in life. Irwin continued:

So he will definitely be the one to walk me down the aisle when the time comes, and I think that will make it really special. And I think that's what dad would have wanted as well.

Speaking of Steve Irwin, Bindi recently shared that she still gets emotional while watching old footage of her father. During an interview with Stellar magazine, she explained the tears often come when she least expects it.

“It was just an ordinary day and we were playing the video where we petition against harvesting of crocodile eggs,” she told the publication. "There's old footage of dad with the crocodiles and, even though I’ve seen the video maybe 50 times, that day I started crying. Some days you feel the grief more than others. What gets to me are those moments when I’d love him to be here to share what we’re doing."

I'm so thrilled for Bindi Irwin on her recent engagement. And I have a feeling her brother would be honored to take over their father's duty when she ties the knot. In the meantime, if you need to find me, I'll be over here crying my eyes out at the thought of 15-year-old Robert Irwin walking Bindi down the aisle on her wedding day.