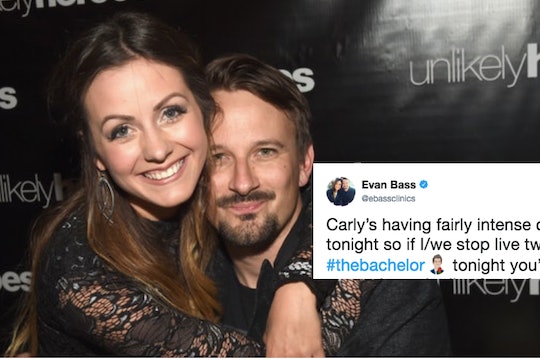 Remember when Evan Bass went so far as faking a trip to the hospital on Bachelor in Paradise, in an attempt to win over Carly Waddell? Well, now the two are married and are expecting their first child together. And in a Monday night tweet, Bass revealed that Waddell was having "intense" contractions. Fans quickly responded to the tweet and clearly Bachelor Nation can't wait to meet the couple's bundle of joy.

Just before 8 p.m. on Monday night, Bass tweeted out the following message to the couple's followers:

Carly’s having fairly intense contractions tonight so if I/we stop live tweeting #thebachelor tonight you’ll know it’s time to purchase the live feed of the birth. 19.95 per minute and includes a complimentary ointment for only 14.99 extra.

And, with Bass' tweet came tons of comments, likes, and retweets from fans. One follower wrote, "If it happens tonight congrats i cant wait for pictures," while another commented, "OMG Baby Bass is coming." After Bass' reveal about Waddell's contractions, he began live tweeting about tonight's episode of The Bachelor. Waddell was also live tweeting her comments about the episode, so she appeared to still be home and not on her way to deliver a baby yet.

Waddell and Bass are expecting a baby girl, according to People, and a couple weeks ago, they revealed the name of their unborn daughter on Instagram. The name of baby Bass-Wadell will be Isabella Evelyn Bass, and she will be called Bella as a nickname. Bass revealed that Bella's middle name is dedicated to his grandmother. "My sweet Grandma Bass was named Evelyn and she was the best and I hope that our daughter is fierce like her," Bass explained in an Instagram post.

Well, it looks like baby Bella could be here at any moment, though she isn't officially due until Feb. 16, as Waddell shared on Instagram.

Waddell was a contestant on Season 19 of The Bachelor in 2015, vying for the heart of Chris Soules, according to Heavy.com, and Evan Bass was a contestant on Season 12 of The Bachelorette with JoJo Fletcher. But, the two didn't meet until they appeared on the reality spin-off show Bachelor in Paradise. It was Waddell's second time on the show and she was not interested in Bass, to say the least. After he kissed her for the first time, Waddell dished to the camera about how horrible she thought the kiss was. But, Bass didn't give up. He decided to fake an illness and even go to the hospital, hoping to win some sympathy points with Waddell, according to People.

And it actually worked. In fact, Waddell and Bass ended up getting engaged on the show and also married on the latest edition of Bachelor in Paradise over the summer, on June 17, 2017 in Mexico, according to People.

Just before the couple tied the knot, all ready in Mexico, the two actually discovered that they were pregnant, according to People. So, Waddell and Bass knew they were having a baby when they walked down the aisle. In August 2017, Waddell told People:

It was a great surprise, it’s a great little miracle. I was a little late … We took a pregnancy test in Mexico, and we saw the thing [in Spanish] and were like, "What does that even say?" So we Googled it.

According to Us Weekly, this will be the first daughter for Bass, who already has three sons from his first wife. Together, Waddell and Bass live in Nashville, Tennessee, so baby Bella will be a Tennessee girl. And, maybe one day Bella will star on The Bachelorette, keeping Bachelor Nation in the family!