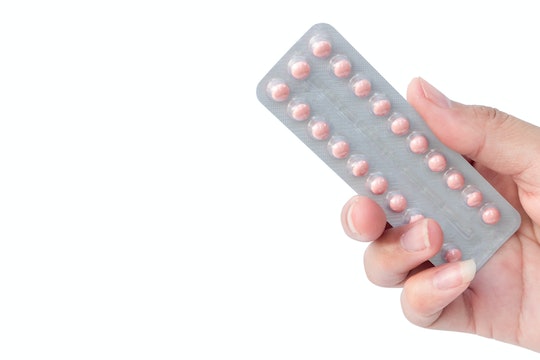 Study: Birth Control May Help Prevent Some Types Of Cancer In Women

Nearly all women who have sex will use some form of birth control in their lives, and four out of five will choose the birth control pill, according to the Guttmacher Institute. But the longer a woman takes the pill, the more life-saving protection she may have against certain forms of cancer, according to a new report from JAMA Oncology. And (perhaps most surprisingly) National Cancer Institute researchers found that long-term use of the pill may prevent certain forms of cancer — even if a woman smokes, is overweight, or doesn’t exercise regularly.

The NCI researchers used data from more than 100,000 women in six different states, between 1995 and 2011, according to JAMA Oncology. The participants were between the ages of 50 and 71, according to the report, and most had used oral contraceptives at some point. The study's authors found that women who reported taking birth control pills for 10 years or more saw a life-saving dip in the odds of developing certain cancers: their risk of ovarian cancer dropped 40 percent compared to women who had never used oral birth control, and their risk for endometrial cancer went down 34 percent.

While prior research has established that long-term birth control pill use lowers a woman’s risk of certain forms of cancer, this study is the first to show that those protections continue even if a woman lives a less-than-healthy lifestyle, TIME reported.

Surprisingly, the findings suggest that pill use might give women with certain lifestyle factors typically associated with increased cancer risk — smoking, obesity, and not exercising, for example — even greater protection than the pill alone might. For example, women who used the pill and smoked or had a body-mass index (BMI) in the obese range had among the lowest ovarian cancer rates, according to the study. In addition, women who were obese and used the pill for 10 years or more lowered their risk of developing endometrial cancer, while women with a BMI in the "normal" range and used oral contraceptives did not.

It’s worth noting that doctors have long warned against smoking while on oral contraceptives, and in general. Women over age 35 who smoke while taking the pill are at increased risk for heart attacks or stroke and older forms of the pill appear to have carried even greater risk, according to WebMD.

But the research on whether using the pill (with or without other risk factors) increased a woman’s odds of developing various forms of cancer have yielded a far more mixed picture. Late last year, a Danish study concluded that relying on hormonal birth control exposed women to a “small but significant” increased risk for breast cancer. Just how small? Researchers estimated that for every 100,000 women, using birth control pills or other forms of hormonal contraceptive "caused 13 more breast cancer cases" each year, The New York Times reported.

But research on other forms of cancer have been more promising: a British study that followed participants for more than four decades showed that birth control pills reduced the risk of less common forms of reproductive cancer, including endometrial and colorectal cancers, according to The New York Times.

In a commentary published last December in the New England Journal of Medicine, University of Oxford professor David J. Hunter explained the “complex” relationship between cancer and the pill:

In aggregate, over a woman’s lifetime, contraceptive use might prevent more cancers than it causes. There is good data to show that five or more years of oral contraceptive use substantially reduces ovarian cancer and endometrial cancer risk, and may reduce colorectal cancer. And the protection persists 10 or 20 years after cessation.

Because endometrial and ovarian cancers are more likely to be detected in the difficult-to-treat advanced stages, the value of any additional protection to lower a woman’s risk cannot be overstated. Called the “silent killer,” ovarian cancer is only the fifth most common form of cancer, but it accounts for more deaths than any other cancer of the reproductive system, according to the American Cancer Society. More than 22,000 women will receive a new diagnosis of ovarian cancer in 2018, and more than 14,000 will die of the disease, according to the ACS. Endometrial cancer is the most common form of reproductive cancer and far less lethal, according to the ACS. Around 63,000 women will be diagnosed with endometrial cancer in 2018, and just over 11,000 women are likely to die from it within the next 12 months.

Despite the surprising results, researchers cautioned against using oral contraceptives for reasons other than preventing pregnancy or managing certain menstrual disorders. Instead, as TIME reported, they urged medical practitioners to use the findings to help women better understand their risk of developing certain cancers during and after menopause. And as always, women who have questions about choosing hormonal birth control or managing their own cancer risk should speak with their doctors.