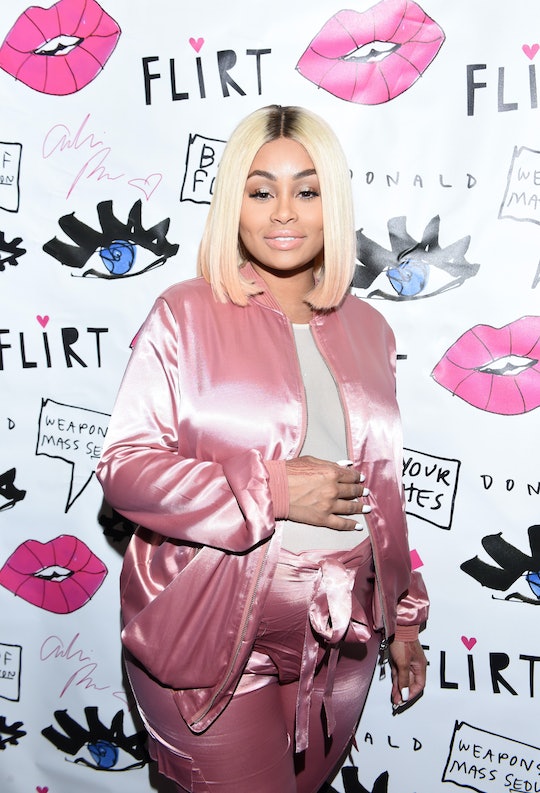 The new Kardashian baby is here. Blac Chyna and Rob Kardashian welcomed their baby, a girl, according to Us Weekly. A rep reportedly confirmed the news to Us, though the couple hasn't confirmed the child's birth yet themselves. When they do, there's no doubt that fans will lose their sh*t, because Chyna has certainly been hyping the baby's arrival with copious bump pictures on Instagram.

According to E! News, the couple named their first child Dream. A source reportedly told E! "She is gorgeous and has tons of hair!" The baby reportedly weighs 7 pounds 5 ounces, and Chyna delivered her via C-section on Thursday morning with Kardashian and her mother, Tokyo Toni, at her side, according to E!. The baby was born at the Cedars-Sinai Medical Center in Los Angeles, according to Entertainment Tonight. Of course, this is something that fans of the couple will be able to see for themselves, because Chyna and Kardashian will reportedly televise the birth, according to Us. The "Rob and Chyna Baby Special" will air on Dec. 18 at 8 p.m. Eastern Time, according to a press release from E! Entertainment.

Chyna has been really open about her pregnancy on social media — especially on Instagram. About a week ago, she shared the following photo with the caption:

Checking on our baby girl 👶🏽! Never knew I'd be so happy about gaining 72lbs !

In early September, Kardashian and Chyna announced that they were having a baby girl on an episode of Rob & Chyna, according to Entertainment Tonight. In the show, Kardashian talked about what the baby means after the death of his father:

It's an emotional moment. Me wanting to have a boy, it definitely stems from my dad, but I'm sure I'll have the same relationship that I had with my father with my daughter. I'm just happy that the baby's healthy.

Chyna already has one child, King Cairo Stevenson, with rapper Tyga, who is now dating Rob's younger sister, Kylie Jenner. Phew, glad we got that strange web of connections out of the way...

But Chyna is doing nothing but looking forward. According to Entertainment Tonight, she described the kind of father she wants Kardashian to be:

Overprotective! For sure. Loving, caring. Rob is just a big bundle of joy.

In a separate Entertainment Tonight exclusive, a rep for Chyna and Kardashian reportedly confirmed that the two would continue living in separate houses once the baby was born:

Rob and Chyna are going to keep their separate houses, even after their daughter is born. Rob can be a very hard person to live with. Chyna wants a healthy environment and home for both her children. If there is any chance of not having that, she will make sure to avoid it at all costs.

Whatever is best for King Cairo and Dream sounds like the best plan to me.