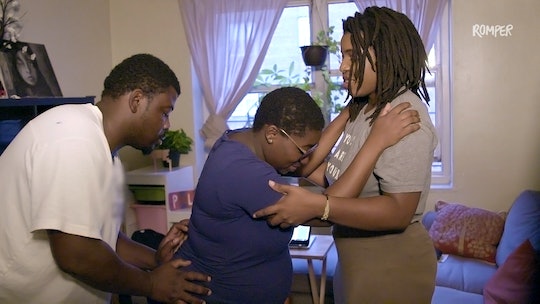 How Black Doulas Are Quietly Changing Delivery Rooms Across The Country

The birthing process for first-time mothers is stressful enough. But discrimination from medical professionals while in labor can lead to a traumatic birth. That’s precisely what happened to Khadija Charles and her husband Kevin who are featured in season 2, episode 3 of Romper’s “Doula Diaries.” Thankfully, when expecting their second child, they were connected with Efe Osaren, a black doula in New York City, who guided and protected them through a healthy, vaginal delivery.

Five years ago, Charles was pregnant with her first daughter, Olivia. She recalled feeling forced into having a c-section by doctors because of being poor and black, a clear act of discrimination. Upon birth, her baby suffered medical complications including being deaf in one ear. When Charles got pregnant a second time, she was determined to have a vaginal delivery despite pressure to have a c-section from medical professionals because of the higher risks involved. Osaren listened closely to her wants and needs, and helped her do what she felt was best for her baby.

“We talked a lot about birth plans, what did she want to do, what did she not want to do, having her husband in the space with her,” Osaren said. “[It’s helpful] when you know what your client is going through before her saying … this is what happens [to me] on a daily basis because I also have those experiences.”

Osaren, having worked with black and low-income mothers before, knew that the best thing to do was to tailor her treatment specifically to Charles.

“I’m not going to recommend you eating kale and blackstrap molasses when that’s not in your daily lifestyle. This is what you eat, this is your income, let’s find a way that’s better for you,” she tells Romper of her approach to each expectant mother. “So really meeting my client’s where they’re at and really listening to them and [saying], ‘What is helping you? What is harming you? What is healing to you?’”

As a birth worker, Osaren is well aware of the varying types of discrimination black mothers face when giving birth. Black mothers face a maternal mortality rate three times that of the rate for white mothers, per CDC data analyzed by NPR and ProPublica. Further, preeclampsia and eclampsia are 60 percent more prevalent in women of color than white women, according to a report by the Agency for Healthcare Research and Quality.

The doctor was kind of bullying us to stay. And it took maybe half an hour back and forth of him saying things like, ‘Well if you leave, your babies going to die’ and giving her all these scare tactics.

Osaren recalls a time she informed a set of expecting parents that if they arrived too early at the hospital for delivery, doctors and nurses would try to scare them into staying at the hospital instead of heading home for a bit, claiming the baby would be facing medical problems if they did so. The parents didn’t believe her… until the mother went into labor.

“When we went to the hospital, sure enough, we got there too early and when we went to leave, the doctor was kind of bullying us to stay. And it took maybe half an hour back and forth of him saying things like, ‘Well if you leave, your babies going to die’ and giving her all these scare tactics, and the father looked at me like, ‘Yo, you were right. This is crazy,’” she recalls.

“In the end, they had a healthy pregnancy. We did go home and labor more and [then] come back and have a healthy vaginal birth.”

Osaren recalled another experience where a couple experienced prejudice from attending staff. “There was a time where the nurse asked ‘Is this the father?’ to the person in the room, like if this is not the father then he needs to leave the room. And I remember looking at her like why does it matter if he is the father or not? And why would you just assume he’s not the father? This is someone helping the birthing person.”

To have a black doula there to kind of be that barrier from those questions and preparing them for what their outcome could be [makes all the difference'.

Having black doulas to assist mothers of color is vital, especially when some medical professionals are subject to racial biases and stereotypes. Doctors are sometimes use "false beliefs about biological differences between blacks and whites to inform medical judgments, which may contribute to racial disparities in pain assessment and treatment," concluded one report by Proceedings of the National Academy of Sciences of the United States.

“A lot of times it’s just [being] met with stereotypes like, ‘Oh, you’re a single mom, you didn’t take care of yourself, you didn’t go to prenatal, no one’s taking care of you, you don’t know what you’re talking about,'" says Osaren. "And to have a black doula there to kind of be that barrier from those questions and preparing them for what their outcome could be [makes all the difference]."

While doulas are there to cater to the mother, she says, their presence also changes the equation in the delivery room. “We’re teaching childbirth education and providing comfort methods for black women and black families, but we’re also putting ourselves in the space of how to protect people from the system.”

She recommends expectant parents look at black doula and midwife directories online to find someone local to them. And, she recommends, “start educating yourself on what a natural, healthy birth looks like before you get pregnant.”

You can turn around the experience, she believes, by "having a black doula there to advocate and say, Hey, this is what my client is saying, this is what she wants and you need to respect that.

"These are her rights.”

Watch the episode below, and visit Bustle Digital Group's YouTube page for the other episodes, launching Mondays in December.

More Like This
Pitocin Induction: What It Is & The Play-By-Play
I Found Gender Euphoria In My Second Pregnancy
OB-GYNs On How The End Of Roe Changes How They Can Care For Us
This Is How Your Water Breaks During A C-Section