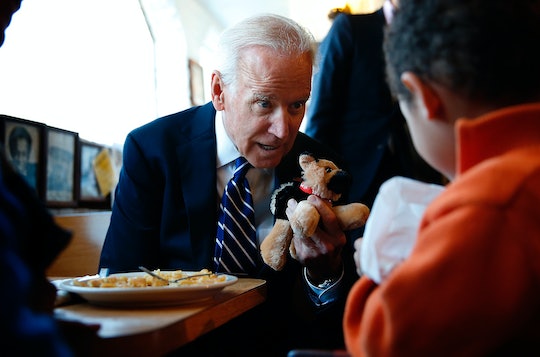 The Tricky Thing About Politicians Coming After My Vote

It hasn’t always been easy for me to tell when a politician is pandering to me or my community — the all-important young, Black bloc of voters. As we approach the 2020 election, you can be sure we will see more and more touching photo ops of candidates with our children, and it can admittedly feel good to be recognized as a group important to the country’s future. Once upon a time, I gave my unwavering trust and offered my hopeful passion to Democratic candidates’ campaigns in an effort to be a part of the change I wanted to see the world.

Then I read the Moynihan report.

While the report, officially titled “The Negro Family: The Case For National Action,” was published in 1965, Daniel Patrick Moynihan’s racist and classist treatise still serves as a source of inspiration for many politicians working today. Whether they realize it or not, Moynihan’s misguided, misinformed, and anti-Black rhetoric provides content for contemporary politicians’ comments and opinions about Black people in the United States. Sadly, many of those comments and opinions are shrugged off as being misunderstood or, worse, backed by some truth.

Moynihan was the Assistant Secretary of Labor under Lyndon B. Johnson and he argued, in his report, that single Black mothers were to blame for the poverty and socioeconomic inequality faced by Black Americans. As someone hired to help Johnson develop policy initiatives to tackle the War on Poverty, Moynihan’s insight and research was critical. Black activists, scholars, and civil rights leaders have continuously criticized the Moynihan report for its reliance on harmful stereotypes about Black people rooted in violent anti-Black sentiments originating during the slave trade.

But despite its controversial stances and pseudoscientific data, the issues raised and claims made in the report remain popular in the United States’ political imagination. We can even see evidence of it in the current races for the 2020 presidential election. In subtle and unexpected ways, though.

Whether it’s emphasizing commitment to legislation and policy related to marijuana legalization, or regularly reminding people that they once marched with MLK, candidates across party lines do an excellent job of attempting to secure Black votes.

Stereotypes about Black people, and pandering masquerading as legitimate concern for issues that have historically impacted the Black community, seem to inform how politicians engage with Black potential voters. Whether it’s confusing claims made about possible reparations for slavery, emphasizing commitment to legislation and policy related to marijuana legalization, using AAVE and slang only when speaking to crowds with a large amount of Black attendees, or regularly reminding people that they once marched with MLK, candidates across party lines do an excellent job of attempting to secure Black votes.

But it goes beyond disappearing, reappearing regional accents.

More insidious are comments made by politicians that are misguided, misinformed, and anti-Black. Joe Biden, for instance, was recently critiqued for statements he made a little over a decade ago about how race impacts school performance began recirculating. When asked about why he felt students in Iowa were outperforming students in Washington D.C. he had told the Washington Post in 2007 that "There's less than one percent of the population of Iowa that is African American. There is probably less than 4 of 5 percent that are minorities. What is in Washington? So look, it goes back to what you start off with, what you're dealing with.”

"When you have children coming from dysfunctional homes, when you have children coming from homes where there's no books, where the mother from the time they're born doesn't talk to them — as opposed to the mother in Iowa who's sitting out there and talks to them,” he continued, “the kid starts out with a 300 word larger vocabulary at age 3. Half this education gap exists before the kid steps foot in the classroom."

He went on to clarify that he was making a “socioeconomic” statement and not a “race-based distinction,” but the assumptions made in those comments were frighteningly similar to those made in the Moynihan report. Biden’s comments were made in 2007, and awareness of racism in the U.S. has grown since then — what was a “gaffe” then would be career-ending now, because the nation has, despite appearances, made progress.

So politicians are more careful about how they engage voters from different communities, and voters therefore need to be aware of when they’re being used.

Amid talks about “electability” in the Democratic party, analysts and journalists are doing their best to convince candidates to prevent what happened in 2016 from happening again. Some, like Bakari Sellers writing for Buzzfeed, argue that “Democrats simply won’t stand a chance in 2020 if [they] can’t energize African American voters,” but the way to do that isn’t by pandering. It also isn’t by letting implicit biases inform our beliefs and policy initiatives.

While they’re representatives in theory, many politicians serve their best interests in practice.

Since politicians are, first and foremost, meant to be representatives who bring the voice and needs of the people to decision-making bodies at various levels of government, it’s necessary to know as much as possible about the recipients of your votes. A politician's voting record, direct action, and policy are important factors to consider when choosing a presidential candidate to support or advocate for. And access to information about candidates is more readily available than ever before. For better or for worse.

Read between the lines and research candidates extensively to get the best sense of their journey, what their fundamental beliefs are, and what types of policy initiatives they’ll enact and support. While they’re representatives in theory, many politicians serve their best interests in practice. We, the people, owe it to ourselves to remain as well-informed as possible.