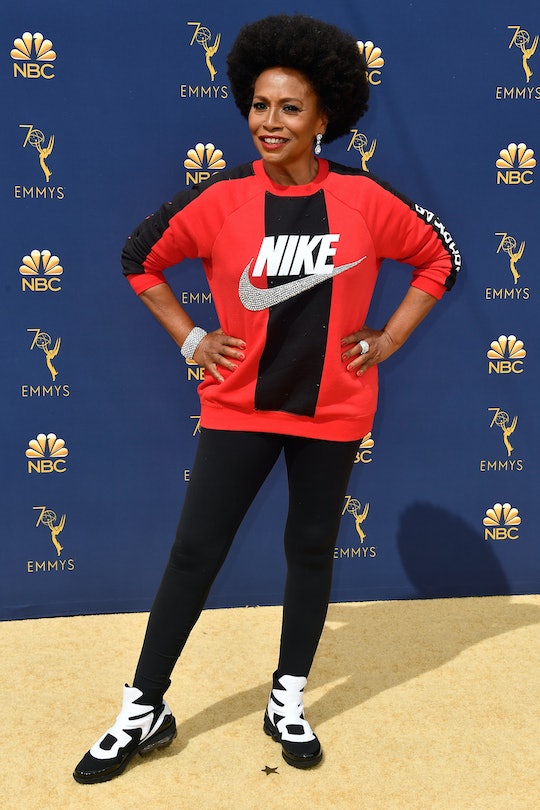 The Emmys red carpet is a fantastic place for actors to use the platform for good and speak out on issues that matter. And on Monday night, at the 2018 Emmy Awards, Black-ish actress Jenifer Lewis did just that with her outfit. Twitter users loved how Black-ish star Jenifer Lewis supported Nike at the Emmy Awards, bringing attention to one very pertinent issue.

The golden carpet at this year's Emmy Awards was filled with absolutely gorgeous gowns — and you can't blame the actresses for wearing them. Who wouldn't want an excuse to wear a fancy dress and get all dressed up on a regular Monday evening? But instead of choosing an evening gown or covering herself in jewels, Lewis opted for a more casual outfit instead, according to TMZ.

But Lewis' outfit choice had a huge meaning behind which made it better (in my opinion) than any couture gown worn during the evening. Lewis told Variety that her choice to wear Nike (over a designer like Vera Wang) was meant to make a statement.

"I am wearing Nike to applaud them for their support of Colin Kaepernick and his protest against racial injustice and police brutality," Lewis told Variety.

Her look on the red carpet definitely got her support for the brand across to viewers at home — and of course, she rocked her outfit.

For those who are confused why Lewis would wear Nike to the Emmys — here's a low down. Earlier this month, Nike debuted its newest ad campaign with football player Colin Kaepernick as one of the faces of it, according to USA Today. "Believe in something," the ad read. "Even if it means sacrificing everything." This ad is referring to the 2016 NFL season when Kaepernick made the choice to kneel while the National Anthem played at the beginning of football games because he was protesting "police brutality and social inequality," according to USA Today.

A lot of people were upset by Kaepernick's decision to kneel during the National Anthem, and therefore, were upset by Nike's decision to support him. This caused some people to destroy their Nike gear in protest of this decision, according to The New York Times.

But Lewis' look at the Emmys was the opposite of these protests against Nike. Instead, it was a clear showing of her full support for the brand and its message.

Lewis said that her choice to support Nike was a deliberate one.

"What can I do that's meaningful?" Lewis said, according to Variety. "I'll wear Nike — I'll wear Nike to say 'Thank you. Thank you for leading the resistance.'"

And although her look was definitely casual, Lewis told Variety that she didn't want to go without being glam — the swoosh on her sweatshirt was customized with rhinestones and she wore a fabulous ring, bracelet, and earrings to make her look red carpet ready.

Twitter users were loving Lewis' look. But who wouldn't? She clearly rocked it and was loving her outfit choice.

Of course, this wasn't the first time that people have used the red carpet to take a political and personal stand. In January, countless celebrities took to the 2018 Golden Globes red carpet, wearing a pin in solidarity of people who experienced "sexual harassment, assault, or abuse in the work place," according to Us Weekly. These people took the opportunity to proudly proclaim that time was up and that they had enough of the power imbalance, according to Variety. Lewis' protest falls in line with this, bringing attention to another major issue in the United States.

Although Lewis' look might not have been the ~fanciest~ look of the evening, it was definitely one of the most meaningful and most memorable outfits on the gold carpet.