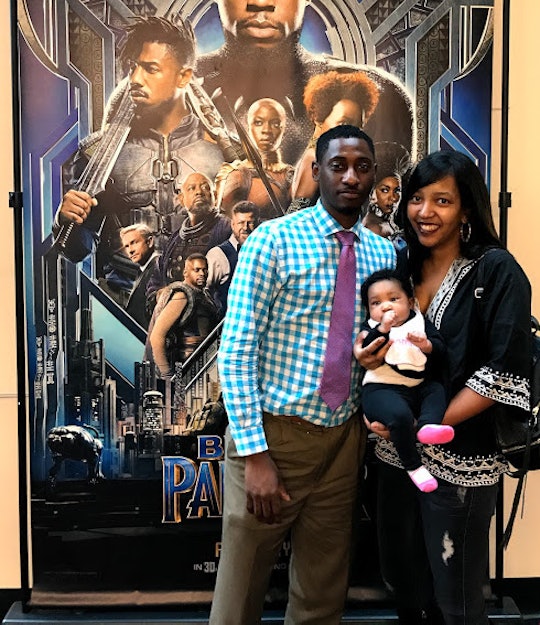 'Black Panther' Isn't Just A Superhero Movie. For Me, It Was A Religious Experience.

If your social media timeline is anything like mine, you'll know just how many people are talking about Marvel Cinematic Universe's Black Panther. Whether the conversation is organically happening in your social newsfeed, or you've caught one of the many critical reviews praising it, it's hard to ignore just how anticipated this film has been. No, Black Panther isn’t the first black superhero film. But for the first time in recent decades, a star-studded, predominantly black and African cast is poised to change the world’s views on Africa via the fictional Wakanda kingdom.

What drew me and my peers to the film was a direct result of the cast and setting: predominantly African American and African actors living in their regal glory in a fictional, technologically-advanced country. Wakanda is an African nation that has not been colonized and prides itself on technological advancements and Afrofuturist ideas that make it a country like no other. The rest of the world is ignorant to Wakanda’s advancement and beauty, holding beliefs similar to today’s real-world stereotypes of Africa — poor, desolate and underdeveloped. Wakanda is anything but these stereotypes, and the fact that the film is able to smash the reductive perceptions minutes into the film is so important. (Plus, you've got a badass 16-year-old girl, Letitia Wright, leading the revolution of technology. Doesn't get much better than that.)

The preparations to see Black Panther for my peers and I — some, like me, who had never read the comic and aren't particularly superhero fans — far surpassed a normal movie-going experience. Prior to seeing the film, my friends and I were sharing tips to help respectfully plan our outfits, and planned to attend Wakanda-themed brunches and pop-up bars. Outside of my friend group, black women representing the Electoral Justice Project launched the #WakandaTheVote initiative, leveraging the movie's large minority turnout to register underrepresented and marginalized communities to vote.

My friends and I also got into debates, too, about African Americans appropriating African culture, a theme the movie directly addressed. In the days leading up to the film, I reveled in seeing jubilant social media posts - including the trending #WhatBlackPantherMeansToMe, which largely focused on the importance of positive black representation in Hollywood. We jokingly alluded to the religious-like ceremony that would accompany seeing a film with such black excellence; it’s sacred and holy collateral, fit with elaborate screenings that included buffets, performances, Kente cloth and songs.

See, this isn't just another superhero film. It became a religious experience.

My own #WhatBlackPantherMeansToMe would go a little something like this: As a young girl who was obsessed with Spike Lee's Crooklyn because of its strong female lead (a preteen in Brooklyn New York with strength unlike any of her four brothers) I can imagine I would have watched Black Panther on repeat during long summer days at my grandparents' house, looking up to the three female heroes in the film, especially Shuri. Seeing black people as superheros, as well as taking in the physical beauty of Africa and its actors would have inspired me to feel better-connected to my ancestors and rid myself of the stereotypes that, even as a child of color, had tainted my own mind. Aside from Crooklyn — one of the only black films at the time that featured children and had a powerful storyline — I found myself watching Harriet the Spy, Casper, and Gold Diggers: The Secret of Bear Mountain. I sought heroism in girls, but could only really find it in girls who did not look like me or share my experiences.

But instead, I saw this movie as an adult. And what did it mean to me? Everything.

As we left the theater after seeing Black Panther, my partner said that he was glad we saw the film in 3D with glasses because I wasn't able to see him crying the whole time. As an avid movie-goer, superhero junkie and a black man, he couldn’t get over growing up and never seeing anything like this film. For him, seeing a black film that highlights Africa as a beautiful, advanced utopian place seems like a dream that one could barely fathom. Films like Meteor Man (1993) aimed to give black people this feeling, but on a modest budget. What made this film standout is the financial resources and backing by Marvel (approximately $200 million worth of resources and backing), which attracted an A-list team and storyline, driving masses to the theaters for a universally important and timely storyline. Africa was no longer a continent of "shithole" countries, it was an unknown captain of technology and industry, and it led to a record-shattering turnout of audiences.

Black Panther is smart, beautiful, cutting-edge and advanced, and it's a film that portrays a storyline that is largely missing from Hollywood. We're not talking about a big budget film with token black characters, but rather a star-studded, A-list black film. Black people, especially in today’s climate, are facing increased racial tension, and this film can help bridge a gap with its positive portrayal of black and African people. It’s a film that also aims to bridge the gap and disconnect between American blacks and Africans, calling for unity and solidarity to help us all advance and combat some of the societal and institutional forces — like wage gaps and poor education in impoverished cities — that still plague our communities.

So after years of waiting for this film; after texts about what we'd wear and where we'd celebrate; after all of that, seeing Black Panther felt like a Confirmation. It was the first and necessary step in taking mature and intentional efforts to learn about and share our storied history.