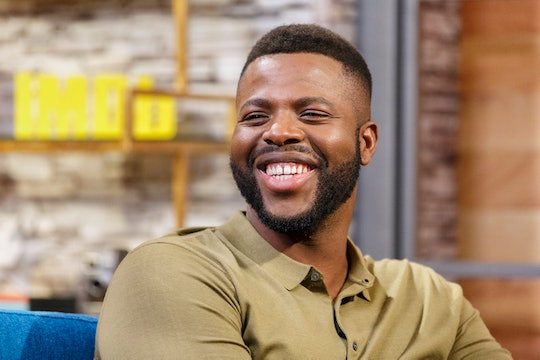 This 'Black Panther' Star Is All About Smashing The Patriarchy

Move over, Mark Ruffalo, because Winston Duke justs became my new favorite celebrity male feminist. That might make things a little awkward during the Avengers 4 red carpet walk, but too bad. Duke, best known for playing the Jabari tribe leader M'Baku in Black Panther and Avengers: Infinity War, is the newest member of the UN Women's HeForShe movement. But first, let's talk about his recent tweet that calls out a common, but very flawed strategy for encouraging men to empathize with women: "What if she were your daughter?" You can also substitute wife, mother, sister, or female cat in place of daughter if you like, because using this cliche to encourage empathy actually dehumanizes women far more than it helps them.

Ideally, we wouldn't need to ask people to substitute a victim with someone they actually give a damn about. It would be cool if people just cared a little bit for all other human beings. I'm not suggesting that it's wrong to value a loved one over strangers, of course, but the real issue with substituting a female loved one in a given situation is that it implies that men are fundamentally unable to empathize with women, simply because they are women.

Women are not alternate humans. They're not a variation of the default male gender. They're just people, full stop. If a man is never asked to put himself in a woman's shoes (and don't even start with the high heel jokes right now), we're implicitly telling him that he and she aren't equal, and he shouldn't even bother pretending that they are for the sake of a thought experiment. "Even in your own imagination, don't try to fool yourself into thinking that a lady-human is comparable to a full, male, alpha human like you, not for one second!" That's messed up, no?

And if the only way we can get men to value a woman is to compare her to one that they know, it means that by default, those women are also second-class humans. A daughter or wife is more valuable than a strange woman, but still not comparable to a man. This rationale teaches men to regard women extensions of themselves; a man who can only muster sympathy for a woman when picturing his wife in the same scenario doesn't actually care about harm coming to his wife as a fellow human being; he's indignant at the thought that someone could cause damage to his property.

Some might consider this a radical position to take on something trivial, but every microagression against women, each tiny instance of systemic patriarchy and internalized misogyny, they all add up. You may not be bothered by one grain of sand on your shoulder, but you're sure as hell going to feel differently when there are billions of them piled on top of you. When small offenses are normalized, things get worse. If we want real gender equality, we need adopt a zero-tolerance policy towards any and all forms of sexism, no matter how inconsequential they might appear.

That's why I'm so grateful to Duke for picking up on the subtle ways in which his gender is taught to feel superior to women, and his wholehearted rejection of that notion. More men need to embrace feminism, not only for women, but for themselves. The patriarchy, as Duke said at the UN HeForShe IMPACT Summit on Wednesday, "seduces with the lie that it empowers men by devaluing women, but in reality, it corrodes both." I'd love to give you the full transcript of his remarks, but his passionate delivery makes the speech even better, so I'll leave you with one more taste in the hopes that you'll watch the whole thing:

Imagine a society where all women had fair opportunities and outcomes. Imagine what kind of man you would be. Engaging in this conversation can be daunting, and sometimes men feel as though they can't get it right — and perhaps we won't — but if we don't start, we'll never get anywhere. If we don't take action just because we're afraid to fail, then we've already failed. For centuries, women activists have put their blood, sweat, and tear into promoting the rights of the oppressed, and it's about time more men brought our voices, minds, and bodies to the conversation.