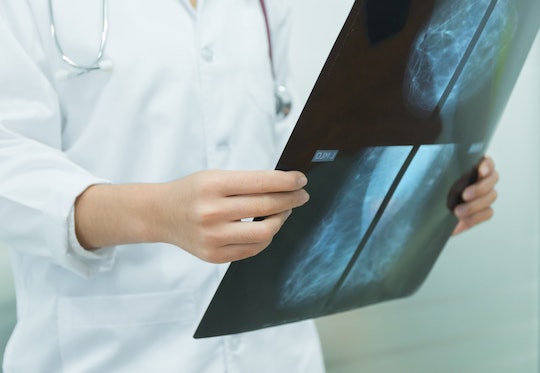 When it comes to the evolving state of breast cancer survival rates in the United States, there's certainly some good news. According to a recently released report from the American Cancer Society, overall survival rates rates among women diagnosed by the relatively common disease are way up from what they were back in 1989. However, also from the American Cancer Society, there also comes a 100 percent unacceptable fact: Black women still die from breast cancer at a significantly higher rate than their white counterparts do. That's a major issue that must be urgently examined and remedied, and researchers and medical professionals know it. The reasons for the disparity range from the concrete to the not-yet-fully-understood, and understanding and addressing them is a vital task.

From the American Cancer Society, 39 percent emerged as the figure to watch. First, the mortality rate among women off all races studied dropped by that much between 1989 and 2015, which means that about 322,600 lives were spared in that timeframe, according to an American Cancer Society study released last week. But 39 percent also represents just how much better a white patient's chances of surviving breast cancer are than a black patient's, the report summarizing current scientific information about breast cancer shows.

These findings, of course, raise the impossible-to-ignore question of why this is the case, and what can be done to close the gap while continuing to improve outcomes for all women diagnosed with breast cancer.

According to the American Cancer Society, one possible reason for the discrepancy has to do with biological differences between the races. Or, more specifically, with the inherent difference in the types of breast cancer that generally afflict white and black women.

Here's what they mean: White women are are more commonly diagnosed with hormone-receptor-positive breast cancer. The drug Tamoxifen is one of the advances in treatment that have done a really good job of reducing breast cancer rates over the years, and it's effective in treating this type of breast cancer. What it's not so good at, unfortunately, is combatting the more aggressive triple negative breast cancer to which black women are more susceptible, according to the American Cancer Society.

So, there's that. But there are social and economic factors at play here, too. For example, according to the New York Daily News, black women actually get mammograms to screen for breast cancer a bit more often on average than white women do, and such preventive care is always key in boosting a person's chances of survival. But that's true because it leads to earlier — and, therefore, more effective — treatment, which is where the racial disparity creeps back into the conversation

HuffPost reported, for example, that accessing treatment is a huge hurdle between a patient and care. "Things like transportation for cancer treatment can be a barrier particularly for women who need radiation therapy, a treatment that needs to be given daily, and who cannot get that time off from work," Christine Ambrosone, a cancer prevention chair at the Roswell Park Cancer Institute, told the news outlet. Oncologist Lee Schwartzberg said that social factors like insurance status could also play a role, according to The Washington Post.

The Post also reported that, in total, this year will see about 252,000 new cases of breast cancer — and 40,600 deaths as a result of the disease. As the second-leading cause of death in women after lung cancer, breast cancer continues to demand the attention of the medical research community. Clearly, though, confronting the fact of the gap in the survival rates between black and white women calls for a more holistic approach. Eradicating breast cancer is a formidable task, and ensuring that all women get the care they need may be just as challenging.