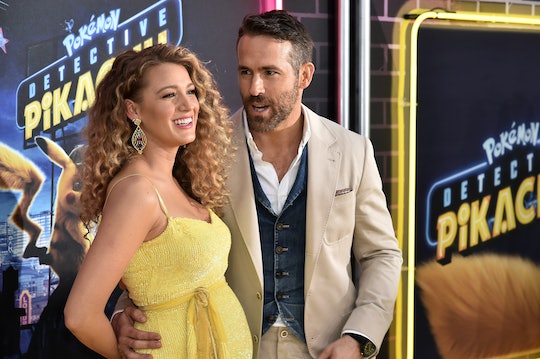 Blake Lively Declares Herself A "PokeMOM" Alongside Her First Bump Photos

Thanks to the power of social media, entertainment news junkies have the opportunity know their favorite stars on a much deeper level than ever before. Celebrities often share photos via Instagram or Twitter promoting their upcoming projects or personal brands. However, plenty of them also offer insight into their personal lives — via photos of their families, their day-to-day activities, and even what they're having for lunch — what fans wouldn't know otherwise. Some stars are practically social media royalty. (I'm looking at you, Kim Kardashian, Chrissy Teigen, and Amy Schumer.) While others have epic moments here and there. Recently though, Blake Lively declared herself a "Pokemom" alongside her first bump photos. And it's perfection.

As E! Online reported, Lively and husband Ryan Reynolds recently revealed that they're expecting their third child. (The couple already have two daughters, James, 4, and Inez, 2.) They "announced" their happy news on May 2 in a pretty matter-of-the-fact way: by having Lively show up on the red carpet with a visible bump, according to E! Online. The surprise bump debuted ahead of the New York City premiere for Reynolds' new film Pokémon Detective Pikachu.

On the day her hubby's new movie finally hit theaters — Friday, May 10 — Lively took to Instagram to simultaneously promote the film and address her bump for the first time, People reported. "PokeMOM.... Out now," she captioned a carousel of herself rocking that yellow dress from the movie's premiere last week. LOL.

See what she did there? Pokemon + mom = Pokemom. (Pretty clever, right?) Of course, when the wildly popular Pokemon Go first hit smartphones in 2016, plenty of women declared themselves Pokemoms, too. (Moms who like playing Pokemon.) Yet, Lively manages to put a whole new spin to the term.

You have to admit that Lively's low-key pregnancy reveal was pretty epic, though. But it probably wasn't overly shocking to fans, considering the couple has expressed wanting a large family in the past. “We'd love to have a big family," Reynolds told Us Weekly back in 2014, about a year before welcoming his first daughter. "We both come from big families — my parents did four, Blake's did five. A lot of people say it's crazy, but we'll only know when we're there, you know? We'll walk through that fire pretty happily, I think."

The doting father of two expressed a desire for more children in December 2016, as well. “If I could have nine daughters, I would be thrilled,” he told People just months after Inez was born. “Really, like I genuinely would be.”

It seems as if Lively is on the same page when it comes to their family size. (Which is definitely a good thing.) “I’m one of five kids. My husband is one of four, so we’re officially breeders," she joked in 2016. "You can go on our website and we will give you some of our children.”

As Blake Lively's third pregnancy progresses, it'll be interesting to see what other mom puns she posts via social media, along with interesting details interviewers are able to get out of her. Because let's face it, her mom anecdotes are pretty much the best. Congrats again, mama, on your little one on the way!