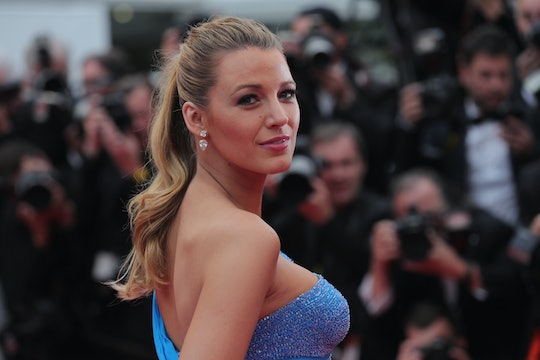 It's officially a full house: Blake Lively has given birth to her third child, Us Weekly reported. This is the third child for Lively and Reynolds, who wed back in 2012. Baby #3 joins big siblings Inez, 3, and James, 4, making their family an official party of five.

Entertainment Tonight was the first to break Lively's pregnancy news, even before the actress made it public. A few weeks later, she revealed her pregnancy at the Pokémon: Detective Pikachu premiere, where she donned a yellow, glittery dress and a baby bump. She later took to Instagram to officially announce the pregnancy with the cute caption, "PokeMOM."

Other than that post, the couple has been mum on other details about baby number three, but now fans know that the couple actually had the baby earlier this summer, with a source confirming to Us Weekly that the little one is about 2 months old. Talk about an exciting time for the fam and their supporters!

The couple's latest addition is in for a treat, to say the least, as Reynolds does his best to be a supportive father, and often approaches his husbandly and fatherly duties with a bit of humor. Referring to his wife's previous labor, Reynolds wrote in a tweet, "Being a Dad isn't just about eating a huge bag of gummy-bears as your wife gives birth. It means being comfortable with the word hero." See? Baby no. 3 is sure to grow up in a house full of humor, which is pretty awesome.

Plus, Lively and Reynolds certainly seem like a fun couple, so it's safe to say their kids are growing up in a home full of laughter. And there's no better example of this than their social media antics, in which they playfully knock one another. "It’s kind of like what my dad used to say: ‘If you can’t say anything nice, say something embarrassing.’ That’s how we roll. I think it’s a sign of a healthy relationship, personally. I do, yeah," he said on a September episode of Kelly and Ryan.

So will this playful duo have more babies in the future? In a September 2012 interview with Allure, the Gossip Girl alum said jokingly, "I've always wanted a big family. Oh, I'd love 30 if I could." It's up in the air, but definitely a possibility.

Lively followed this remark up with a similar sentiment in June 2016, stating, according to Entertainment Tonight: "I'm one of five kids; my husband's one of four. We're officially breeders."

Reynolds, however, joked that he wasn't ready for another kiddo back in December 2018. "It’s hard. It’s always a challenge, with two kids,” he revealed to Ellen DeGeneres, according to Us Weekly. “I think of blinking now like tiny little breaks.”

Of course, Reynolds followed up that remark with a gushing dad quote, telling DeGeneres about parenthood: “It’s the dream. They’re like my buddies.” Aww.

For now, it seems like the family is content as a party of five. Here's hoping we get to see more pics of the fam on social media. Cheers to the new baby!