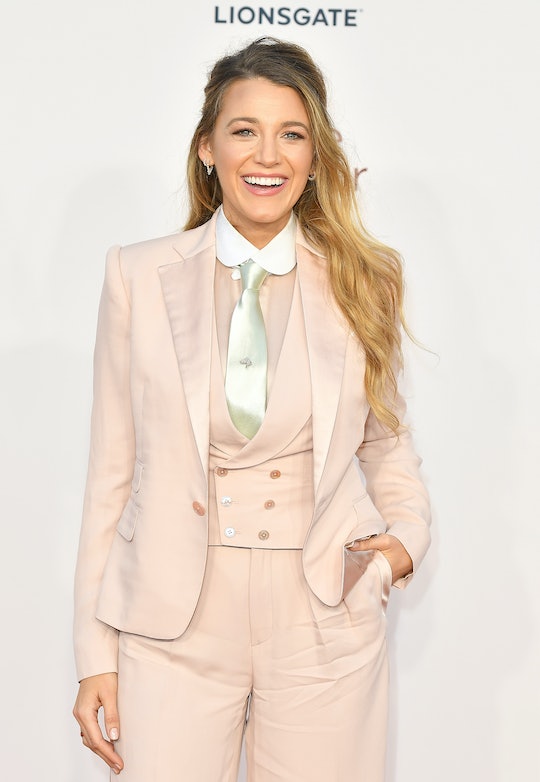 It looks like another Hollywood baby is on its way because Blake Lively is pregnant with her third child! Although Lively didn't make an official announcement, she inadvertently spilled the beans when she was spotted sporting a bump at the Thursday premiere of Pokémon Detective Pikachu alongside her husband and star of the film, Ryan Reynolds. Lively was photographed wearing a formfitting yellow gown that showed off her happy news, which means this might be the most casual pregnancy announcement of all time. Way to keep us on our toes, mama.

Lively and Reynolds are already the parents to two little girls: Inez, 2, and James, 4. The two seemed content with their family sitch for the time being, but buzz about the couple's plans to expand their family reached a fever pitch in recent months.

“They both have great careers, but they love being ‘mom’ and ‘dad’ more than anything," a source shared in September 2018 to Closer Weekly. "They’d be very excited to have more children."

Reynolds had previously joked about the duo having a large family, stating during an interview, according to People: “If I could have nine daughters, I would be thrilled,” Reynolds said. “Really, like I genuinely would be.”

Well, it looks like the actor is one step closer to this reality because Lively is pregnant again. Talk about happy news!

As for fan reactions to the news? People are thrilled.

"Love that Blake Lively announced her third pregnancy at the DETECTIVE PIKACHU premiere while looking like a couture Pikachu goddess," one person wrote.

Someone else said: "Anyone else know that Blake Lively is pregnant again?! I’m so excited."

No word yet on how Inez and James have responded to the news, but Lively did touch on the topic of adding siblings to their family before. During a October 2017 appearance on The Tonight Show Starring Jimmy Fallon, Lively joked about how James reacted to Inez' arrival, stating, according to Elle: "She’s good. She loves her sister. She does the thing where she’s just like ‘Oh, I’m loving her so much but I’m actually really harming her right now.’ You know that thing? And I think she knows what she’s doing."

Ha! I have a feeling James has probably eased up since then. Adjusting to a sibling can take time.

Speaking of pregnancy announcements and siblings, Lively previously brought up how James mistakenly thought that the term "anniversary" is code for giving birth.

“I had to explain to my daughter what an anniversary is,” Lively shared during a September 2018 interview, according to Us Weekly. “She’s like, ‘What is it, does it mean you’re having another baby today?’ And I was like, ‘Dear God, no. It doesn’t, it means it’s our wedding’s birthday.’”

Hopefully, James has since worked out the kinks with the whole anniversary thing. And on that note, congrats to Lively and Reynolds on their baby-to-be! I wish them all the best.