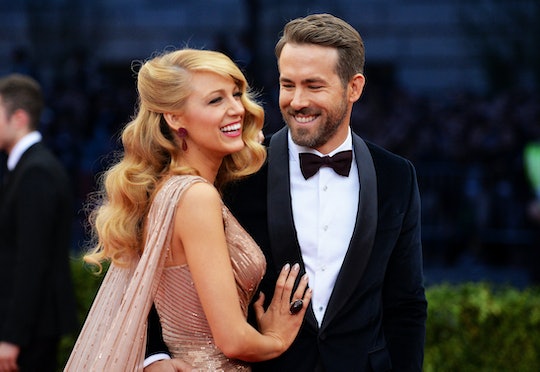 From raising a family together to starring in various projects, Blake Lively and Ryan Reynolds have been quite busy these past few years. A lot has happened, to say the least, but Lively and Reynolds have approached every life change with humor and joy. They've also managed to keep much of their lives private, a big win by Hollywood standards. Case in point: Blake Lively and Ryan Reynolds' wedding 7 years ago was such a well-kept secret, that no public photos of them saying "I do" exist.

Lively and Reynolds, one of Hollywood's most glam and busiest duos, started on their marital journey seven years ago, on Sept. 9, 2009, according People. The two said "I do" just a few weeks after Lively's birthday on Aug. 25, making it an especially joyous summer for the couple.

Despite the pair's high-profile status, however, there are no "behind-the-scenes" photos of Lively and Reynolds enjoying their big day. Whereas most stars let at least a couple of wedding pics leak to the public, you won't find almost any evidence that they tied the knot. That might have something to do with the location of the nuptials, which took place in Mount Pleasant, South Carolina, on the Boone Hall Plantation, according to E! News. Instead of getting married in a major city, these two went down south for a more intimate ceremony.

Although the couple didn't share any pics of their faces, they did share some pics of their venue with Martha Stewart Weddings. "They wanted to celebrate in privacy – and in style. And while they remain protective of images of them on their most heartfelt occasion, they graciously let us share pictures of the elements we created together,” the magazine said about their special day.

So their wedding album might be locked down tighter than Fort Knox, at least fans know something about the big day itself: Lively, then 25, wore a couture wedding gown from designer Marchesa, featuring a fitted bodice and rose-gold embroidery according to Martha Stewart Weddings. As for Reynolds? The then 36-year-old actor sported a Burberry suit kitted out with leather suspenders.

Jeweler to the stars Lorraine Schwartz created the couple's wedding bands for the romantic occasion, according to Glamour.

What's more? The magazine's style director was asked to personally create Lively's wedding bouquet (Lively, an avid baker and crafter, has long looked up to Stewart), mixing pink jasmine, andromeda, and hydrangea, with petals dipped in rose-gold top play off of her gown Gorgeous!

“From the heartfelt ceremony to the fun-filled carnival hour and elegant reception, it was a truly enchanting celebration,” Stewart’s magazine said at the time, according to People, noting that the lovebirds took a mini-honeymoon in Little Washington, Virginia.

Following the wedding, the couple settled nicely into family life with daughters James, 4, and Inez, 2 (baby #3 is on the way). The two have managed to keep their sense of humor even in the thick of parenting, as their snarky online comments about one another are priceless. Reynolds joked, for instance, that he married his wife online.

Most recently, Reynolds shared not-so-flattering pictures of Lively on her 32nd birthday, while she once shared a pic of Ryan Gosling on his big day, with the caption, "Happy Birthday, baby." Fans have confused the two Ryans throughout the years, which made the joke especially funny.

I'm not sure how the couple celebrated anniversary number seven, but I have a feeling they're the type who rather chill at home with their loved ones instead of throwing a big bash. Once you have a full life that includes kids, after all, this is just how anniversaries tend to go. Happy anniversary to Lively and Reynolds!