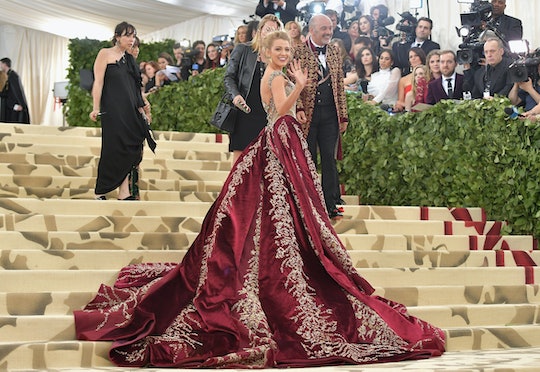 Blake Lively's Met Gala Look Is A Gift From Above

As celebrities worked the red carpet on Monday evening at the Met Gala, several fashion choices stood out during this high-fashion event of the year. Making things even more interesting, the theme for this year was "Heavenly Bodies: Fashion and the Catholic Imagination." And boy did fashion designers deliver. Blake Lively — who walked the red carpet solo this time around — was definitely among those who fully embraced the religious theme. In fact, Blake Lively's 2018 Met Gala look was jaw-droppingly flawless.

As Elle reported, Lively rocked a Versace ruby and gold gown — with a lavishly long train, intricate beading, and two thigh-high, sheer panels — along with an ornate headpiece. And guys, it was phenomenal. When I first saw her on the red carpet, my first reaction was, "Holy crap! She wins the Met Gala, hands down." (This was immediately followed by, "But wait, where isRyan Reynolds? Shouldn't he be there supporting her during one of the biggest nights in fashion." I have two guess on that one: He was busy with some work-related commitment, or he was holding down the fort at home with the couple's two little girls.) But I digress ... Back to Lively's amazing gown. Let's take a moment to feast our eyes on this piece of artwork.

For the record, I'm not the only one who is floored by Lively's look. Not by a long shot. This year, fans were singing to the heavens (and on Twitter) for her incredible look at the 2018 Met Gala.

In case you're wondering about the man power that went into creating Lively's stunning gown, allow me to clue you in. The actress had teased a few details about tonight's dress back in March during an interview with Vogue. “This year’s may be my favorite dress ever,” Lively told the publication. “They’ve already worked on it for 600 hours, and it’s not done.” Wait, what? Six hundred hours?!

I simply cannot wrap my mind around 600 hours of dress-making. That's 25 days, which is pretty darn close to a month. (Mind = blown.) Unsurprisingly, it was the intricate beading — all done by one of Lively's close friends, Lorraine Schwartz — that took so long to complete, Us Weekly reported. Insane hours of work aside, it's difficult to argue that the end result wasn't worth it.

Not that Lively hasn't slayed the Met Gala red carpet year after year for the past decade or anything. (As People reported, designers love to dress her.) Last year, the mom of two graced the red carpet leading to the Metropolitan Museum of Art alongside her actor husband, Ryan Reynolds. She wore a gold gown with a plunging neckline and embellished with fringe-style beading and blue feathers.

Between red carpet appearances, work obligations, and parenting her two young daughters, it's clear Blake Lively is highly in demand these days. Recently, she made headlines for the fact that she deleted every single one of her photos on Instagram, USA Today reported. This was apparently a move to promote her upcoming movie A Simple Favor. But don't worry, her account is back to normal now. In fact, the actress shared a couple of Met Gala 2017 throwback photos on Instagram ahead of Monday's grand affair.

She even poked fun at her red carpet game in one of the posts. "Eternally trying to nail JLo red carpet eyes," she wrote on Instagram. "This is more like deer who’s a big fan of JLo, but currently is caught in headlights, while still trying to stay dedicated to giving those damn eyes. That’s what I was going for..." LOL.

Rest assured, Blake Lively — you definitely did not look like a deer caught in headlines at the 2018 Met Gala. In fact, you totally nailed it, girl. And I have a feeling people are going to be talking about this jaw-dropping dress for quite some time.