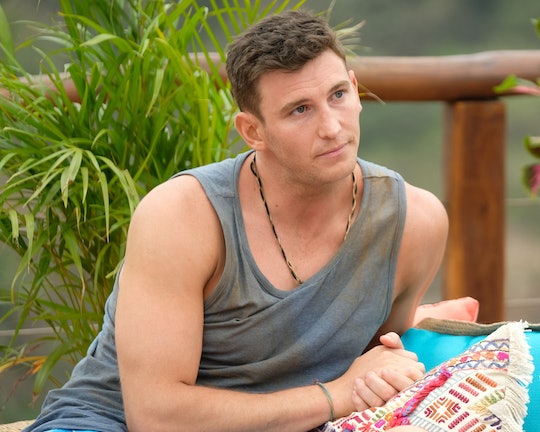 Twitter Is Ready With Blake Memes For 'Bachelor In Paradise'

Blake Horstmann smashed Bachelor in Paradise precedent by showing up to Mexico having already been in a love triangle before the show started filming. In the season premiere, viewers learned that he'd slept with both Kristina Schulman and Caelynn Miller-Keyes within 24 hours of each other at a music festival prior to filming BiP. So he's cultivated a bit of a "playboy" personality for himself this season, as Chris Harrison so generously put it, and Blake memes from Bachelor in Paradise have been proliferating ever since.

When the BiP Season 6 casting news was announced, Blake was among the fan favorites. He was a super sweet finalist on Becca Kufrin's season of The Bachelorette — arguably better liked than her final rose recipient Garrett Yrigoyen — and Bachelor Nation was excited to see him potentially find the love he deserved in Paradise. Unfortunately, he seized on his Bachelorette fame just a little too enthusiastically, apparently throwing himself into a bunch of flings with other alums. (If you're new here, the contestants infamously hang out with each other all the time doing Bachelor Nation promo events, so it's pretty common for them to pair off outside the show.)

The Stagecoach Festival in Indio, CA is the event at the center of this controversy. It took place from Apr. 24-26, and several Bachelor franchise alums were in attendance, including Blake, Kristina, and Caelynn. At some point during the festival, Blake slept with Kristina, whom he'd apparently had an on-again-off-again flirt-lationship with. The problem is that the very next night, he slept with Caelynn. He fessed up to Caelynn about Kristina the morning after, but didn't tell Kristina about Caelynn until a couple of weeks before Paradise. Shady? Yes. The end of the world? Probably not!

But then, Blake allegedly requested that Caelynn not say anything about their dalliance while in Paradise. She even accused him of calling their night together "a mistake," which Blake didn't remember saying, but didn't deny either. Prior to Blake and Caelynn's confrontation, he went on a date with Tayshia. And then when Kristina showed up on the beach with a date card, she asked Blake out, too. Amazingly, Kristina used their time together to give Blake an opportunity to own his behavior. But instead of admitting that he acted kind of sleazy and apologizing, he went after Kristina for calling him out. Evidently, he expected her to keep their Stagecoach rendezvous under wraps, too.

But wait, there's more! Finally, at the cocktail party preceding the rose ceremony, instead of 1) laying low, or 2) focusing on Tayshia, who didn't really have anyone else pursuing her, Blake upended Hannah and Dylan's connection out of nowhere to plan a romantic date for her. Dude! What? Blake claimed that he'd come to Paradise to pursue a relationship with Hannah all along and he was trying to get himself back on track by adding yet another side to his love polygon. Needless to say, Blake is full-on Paradise spiraling right now and it's only week one. Whether he can pull out of his nose dive or not is very much the question of the season.