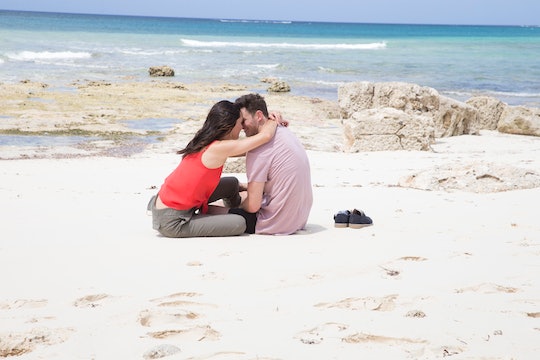 Blake Reveals A Heartbreaking Event From His Past

Blake has already opened up about the complicated dynamics surrounding his parents' divorce, but during hometown dates, he shared another heartbreaking trauma from his high school years with Becca. Blake revealed that he experienced a school shooting on The Bachelorette and the circumstances of the event were horrifying.

A Bachelorette contestant's former high school is a popular setting for the show to stage a nostalgic date, but in Blake's case, he had a more somber reason for taking Becca to Platte Canyon High School in his hometown of Bailey, Colorado. After looking at cute photos of Blake in his football glory days and wandering the halls for a while, the pair eventually sat down in the library for a serious talk, which Blake openly admitted in a confessional interview that he was nervous about. But he was able to open up about the harrowing experience with clarity and grace. Blake explained to Becca that high school was a big part of his life, not just because of the affair and divorce that destroyed his parents' relationship at the time, but also because of another big event. Continued Blake:

My senior year of high school, unfortunately, my school was victimized by a school shooting. It was really hard because I was a senior, my sister was a freshman, and my mom worked at the school, so we were all in this building when it all happened. It was a complete stranger. He just happened to be camping in the area and obviously had some mental issues. He walked into my high school, opened fire, and I heard my mom get on the intercom, and she said, "Code white, code white." And I knew something was wrong, I could feel it in her voice, I could hear it, you know, she had been crying.

The gunman was 53-year-old Duane Morrison, and after entering the school, he took six female students hostage and sexually assaulted them, before releasing four of them. As a SWAT team entered the room in which Morrison had barricaded himself with the two remaining hostages, both sides opened fire and 16-year-old Emily Keys was fatally shot as she tried to run away. Morrison later turned his gun on himself and died from self-inflicted gunshot wounds.

I'll never forget looking at Mr. Miller and he kind of went white. There was some real fear, obviously. We really didn't know at that time what was going on, and we started stacking desks and hiding behind desks and chairs. Finally, the SWAT team came in and they slid their badge under the door and escorted us out. Unfortunately, one student did lose her life. It just changed my outlook on life, and I wanted you to know why it's important to me to be positive and to see life as a gift. What was pretty incredible was to see the outpouring of love and support. That's what that #BaileyStrong sign is, it's just how incredible our community is. You can come out of that stronger or you can let it affect you and you can let it ruin you.

Becca was deeply moved by his story and clearly appreciated him sharing even more of his backstory with her. "Blake has been through a lot of terrible things in life and from that, he has become such a strong, just, beautiful human being," she said in a cutaway interview.

For his part, Blake insisted that he also had some really good memories from high school, and had planned one last surprise for Becca in the auditorium. They capped off their date with a surprise Betty Who concert and their hometown ended with a sweet dinner shared with Blake's parents. In the end, it felt like one of the most memorable hometown dates in the show's history. Sadly, Blake's experience is becoming relatable to a growing number of Americans.