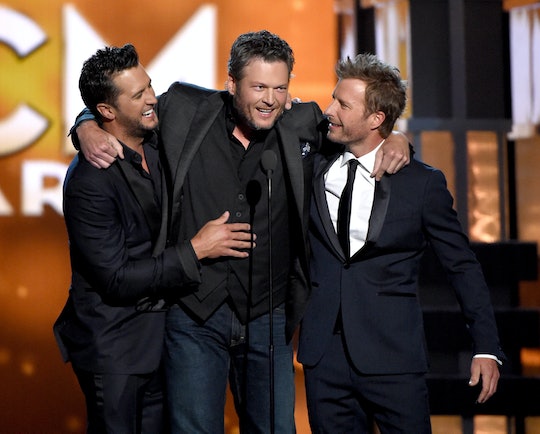 Because he just simply cannot stay out of the spotlight, Blake Shelton opened the ACM Awards with Luke Bryan on Sunday night and it was a match made in county music heaven. Shelton and Bryan hosted the awards together for four years, so it was nice to know that there was no bad blood about Dierks Bentley getting the gig this year. He joined Bryan to open the broadcast by picking up some verses with the host on his new single "Huntin’, Fishin’ and Lovin’ Every Day.” The two country singers finished with a bro-hug as the crowd went wild with the cameo.

Shelton then got the chance to sing one of his own songs, “Came Here To Forget." Once the show officially opened with co-hosts Bryan and Bentley taking the stage for their monologue, Shelton appeared again to officially pass on the torch. The moment was meant as a cute gag (The Voice judge took to the stage after being away from his long stint as co-host of the ACM Awards), especially since many fans considered Shelton's hosting absence a snub. However, back in February, Shelton played off his replacement as a joke, writing on Twitter, "Oh well.... I just have to do better. Working on it now!"

Shelton is extremely vocal on Twitter, so it's nice to know that he's just been too busy with The Voice, his new album, and his steamy new relationship with fellow Voice judge, Gwen Stefani. Still, fans were thrilled to see him nonetheless, as he's sort of one of country's biggest stars (one that some fans love to hate). Of course, that's part of the fun of these niche awards shows — it's like one big, happy, country family.

Well — sort of. As Blake sang his new single "Came Here To Forget" early in the show, many fans wondered whether or not his new flame was in the crowd or if it was awkward or not for ex-wife Miranda Lambert, who just so happened to be in attendance. (No word on if Gwen was in the crowd. Lambert was sat next to Keith Urban and Nicole Kidman.) Although Lambert and Shelton have kept things friendly since their divorce, Lambert came with her new boyfriend, Anderson East, in tow. Shelton is very publicly moving on and now country fans have proof that Lambert has, too. It's the kind of love life angst that would make a perfect country song, right?

If all parties involved can move on from huge relationship status changes, maybe next year Shelton will be able to attend as a mere nominee or performer instead of crashing the stage. But that seems unlikely, knowing Blake Shelton, doesn't it?