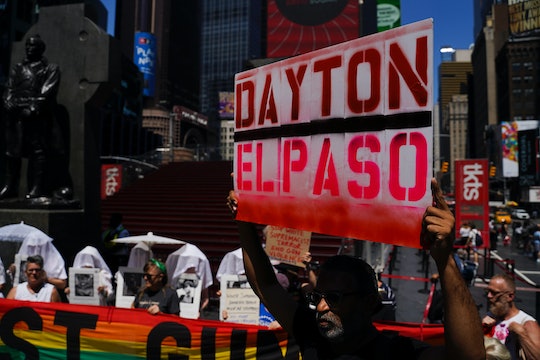 Over the course of just one weekend, the United States endured two devastating mass shootings that killed at least 31 people and injured dozens more in El Paso and Dayton. And while the majority of Americans are calling for immediate gun reform, President Donald Trump said mental health issues are to blame. As politicians continue to battle it out, the American Psychological Association (APA) has warned that blaming mental illness for gun violence is not only "inaccurate"and "stigmatizing," but it also goes against "scientific evidence."

In the aftermath that followed this weekend's horrific events, as NPR reported, Trump took to live television and said one factor contributing to gun violence was mental illness, something the APA said is inherently dangerous. In a statement issued on Aug. 5, APA CEO Arthur Evans said: "Blaming mental illness for the gun violence in our country is simplistic and inaccurate and goes against the scientific evidence currently available.”

Representing the largest group of psychiatrists in the country, Evans also said in the statement that “the overwhelming majority of people with mental illness are not violent and far more likely to be victims of violent crime than perpetrators of violence.”

Data from the U.S. Department of Health & Human Services supports this statement from the APA. According to the agency, "the vast majority of people with mental health problems are no more likely to be violent than anyone else," adding that only 3 to 5 percent of "violent acts can be attributed to individuals living with a serious mental illness."

While calling for more focus on mental health screenings, in response to the Dayton and El Paso shootings, Trump referred to mass shooters as "mentally ill monsters," an act that could further stigmatize mental illness and even prevent people from seeking out help, as NPR reported. On Monday, according to The Washington Post, Trump said:

We must reform our mental health laws to better identify mentally disturbed individuals who may commit acts of violence and make sure those people, not only get treatment, but when necessary, involuntary confinement. Mental illness and hatred pull the trigger, not the gun.

But, according to Evans, there's no one way to tell if a person shows signs of being a potential mass shooter. "As we psychological scientists have said repeatedly, the overwhelming majority of people with mental illness are not violent," Evans' statement continued. "And there is no single personality profile that can reliably predict who will resort to gun violence."

Anyone with a history of violence and easy access to firearms is more of a threat, according to Evans. "Based on the research, we know only that a history of violence is the single best predictor of who will commit future violence. And access to more guns, and deadlier guns, means more lives lost," he said in the APA's statement.

APA President Rosie Phillips Davis, issued a similar statement on Aug. 4, warning that other countries have close to, if not identical, mental health numbers as the United States, yet their mass shooting incidents are nowhere near as high. "The rates of mental illness are roughly the same around the world, yet other countries are not experiencing these traumatic events as often as we face them," Phillips Davis said. "One critical factor is access to, and the lethality of, the weapons that are being used in these crimes. Adding racism, intolerance and bigotry to the mix is a recipe for disaster."

Sen. Chris Murphy (D-Conn.), a long time advocate against gun violence agreed and tweeted this statement that echoed both messages from the APA: "... 4 out of 5 mass shooters have no mental illness diagnosis, and half showed no signs on a prior, diagnosed illness. Framing this as just a mental illness problem is a gun industry trope. Period. Stop."

Unfortunately, the horrific scenes that played out in Dayton, Ohio and El Paso, Texas are becoming all too familiar. So far this year, there have been 255 major mass shootings to date, according to CBS News. While statistics and science point to the fact that mental illness is not a deciding factor in mass shooters' motivation, some politicians, including Trump, continue to use harmful rhetoric and misconceptions as a means to push forward their own political agendas.