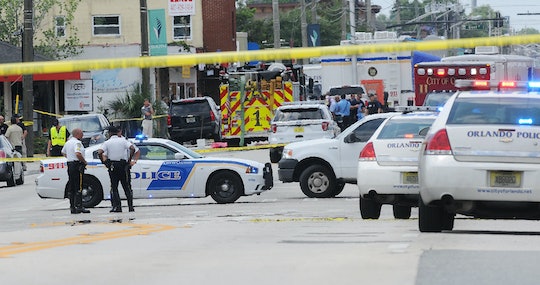 Blaming Muslims For The Orlando Terror Attack Isn't The Answer

At 2 a.m. on the morning of June 12, a gunman opened fire at Pulse nightclub, an Orlando-area bar and lounge, killing 50 and wounding more than 50 more. ISIS has since claimed responsibility for the confirmed terrorist attack, and predictably, it's led to wave after wave of Islamophobia. Not only is that the wrong knee-jerk reaction to what happened in Orlando, but blaming Muslims for the Orlando terror attack isn't the answer. In a statement by President Obama following the Orlando terror attack, Obama urged America to stand together in the wake of the attacks. It's unfortunately become a line the president has used again and again over the course of his eight-year term. He said, "As Americans, we are united in grief, in outrage, and in resolve to defend our people," and there's not a doubt in anyone's mind his choice words were carefully, purposefully, and meticulously chosen.

Amaq News, a Syrian news agency with ties to ISIS, confirmed that ISIS was, indeed, responsible for the attack that took place in Orlando. Amaq News reported that "The armed attack that targeted a gay night club in the city of Orlando in the American state of Florida which left over 100 people dead or injured was carried out by an Islamic State fighter." Nowhere in that statement does ISIS say that the person who carried out this attack was a "Muslim who hates Americans" or that it was carried out by a "Muslim who seems to do harm to America." And right now — which so much left up in the air — these words are important to hold on tight to.

Obama's message to the nation was pointed and direct. He continued,

This is an especially heartbreaking day for all of our friends, all of our fellow Americans who are lesbian, gay, bisexual, or transgender. The shooter targeted a nightclub where people came together to be with friends, to dance and to sing, and to live. The place where they were attacked was more than a nightclub, it was a place of solidarity and empowerment, where people have come together to raise awareness, to speak their minds, and to advocate for their civil rights. So this is a sobering reminder that attacks on any American, regardless of race, ethnicity or sexual orientation is an attack on all of us. And on the fundamental values of equality and dignity that define us as a country. And no act of hate or terror will ever change who we are or the values that make us Americans.

Immediately following the attack, Mir Seddique, father of Omar Mateen, the confirmed gunman of the attack, told NBC news that the attack carried out by Mateen had "nothing to do with religion."

So while police and other organizations piece together the hows, whats, and whys of this story, it's important to remember who we lost today, not who's at fault. Those lives matter so much more, and we should remember them first and foremost.

More Like This
What Exactly Are Minions, Anyway ?
Family Of Grandfather Killed In Highland Park Mass Shooting Say He "Saved" Their Lives
Megan Fox Explains Why She Asked Machine Gun Kelly If He Was Breastfed As A Baby
Prince Charles Got All Mushy When He Met Lilibet For The First Time