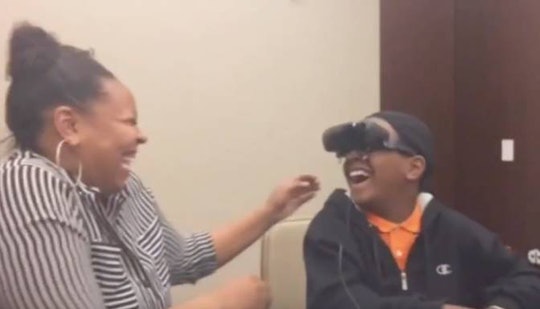 ABC News reported a truly heartwarming story of a fifth grader who saw his mother for the first time with high-tech electronic glasses. Christopher Ward Jr., 12, was born legally blind because of an optic nerve that never developed before he was born. But, with the help of new wearable technology called eSight, the boy was able to see his mother for the first time. In the video his mother, Marquita Hackley, was understandably overjoyed with emotions and broke down crying when he got his first glimpse of his mom. If you’re having one of those days, this goose bump-inducing video will definitely turn it around.

“The very thing he did was turn to me and say, ‘Oh, Mommy! There you are!’ Hackley told ABC News on Thursday. “And then to hear him say, ‘I saw my mom, and she was very pretty,’ was so heartwarming. And aside from pretty, just the fact that he could even see me meant the whole world to me.”

Hackley told ABC News she and her son traveled up to Washington, D.C. to demo a new wearable technology called eSight. According to eSight’s website, the futuristic eyewear works as a hands-free headset that contains a small, high-speed camera that captures live video, which is then sent to a LED screen in front of the user’s eyes, allowing them to see clearly.

As evidenced by Ward’s heartwarming, technology has a made a big step forward, but, according to eSight, the headset will not work for those who are completely and profoundly blind. The gadget is directed towards those with “low vision” or who are considered “legally blind.”

According to ABC News, Ward was born with optic nerve hypoplasia, which is a condition that happens when an optic nerve never fully develops before birth. Ward is considered legally blind, which his mom explained as him only having “little light perception in his left eye and very, very low vision in his right eye.”

His mother continued to explain how poor the boy’s vision was to ABC News and even though he wears glasses, he still needs something to be almost touching his face for him to see it. “[The glasses] are more for protection than vision because there is a strong possibility he could lose the little sight he does have if he were to get hurt or hit on the face.”

After all those pesky tears and heartfelt moments were out of the way, Ward’s mom said he finally got to watch his favorite TV show, SpongeBob SquarePants.

Unfortunately, insurance doesn’t cover the $15,000 eSight headset, but Hackley has been hard at work raising money for her son’s new glasses. According to crowdfunding website YouCaring,com, they’ve raised more than $25,000 so far.

On Saturday she wrote on the YouCaring page to express her gratitude for the support they’ve received. “I never expected for this story to get so big, or for this page to help us raise this amount of money!” Hackley wrote on the crowdfunding site.

With the help of his new glasses, Ward will hopefully be to see the blackboard in school better, maybe binge watch cartoons on a Saturday morning, and even enjoy a colorful sunset. Well done, technology, well done.