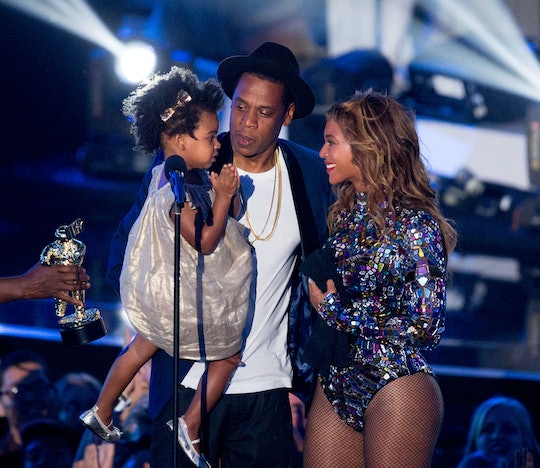 Blue Ivy's Net Worth Might Be More Than You Think

The world is finally getting used to the news that Beyoncé is pregnant with twins, which means that in a few months, the United States will have new royalty to worship. But what of our current princess? Will Blue Ivy's net worth be diluted once she has to split her inheritance with two younger siblings? Will her personal brand no longer wield as much power as it once did? It's impossible to say for sure, but Blue Ivy has grown beyond just Beyoncé and Jay Z's daughter, and believe it or not, the 5-year-old has her very own earning power, as well.

Beyoncé and Jay Z's net worth is estimated to be $1 billion, but if that amount was split three ways, let's be real, it's still more than 100 times what the average person spends in a lifetime. And of course, they're not done earning yet. Beyoncé just released and album and wrapped up a tour that brought in hundreds of millions of dollars last year, and it looks like Jay Z may have finally figured out a way to make money off of his streaming service, Tidal (by selling it to Sprint for way too much money). That $1 billion figure is only going up.

But let's not forget, Blue Ivy has some serious assets of her own. Rumor has it that her parents gave her an $80,000 diamond-encrusted Barbie doll for her first birthday. And her fashion is legendary — she even owns a custom Gucci denim jacket. Once she outgrows each piece of couture, she could auction them off on eBay and be set for life... Or maybe just sell them to North West, who's got to be tired of the bulletproof vest and tutu look by now.

Finally, dressing in high-fashion looks all the time means that Blue Ivy is more than just an owner of expensive dresses — she's a bona fide fashion icon. She has an easy in if she wants to do some modeling work in the future, and she could probably get designers to pay her just to be seen in their duds. If she wants to go a more low-brow route (perish the thought), she could score some easy money with club appearances and Instagram promotion. Not that I think she would, of course. But celebrity finance expert Jo Piazza told Wet Paint that tot's name and likeness could fetch up to $6 million per year, so no matter how many kids her parents have, Blue Ivy will never need to worry about money.