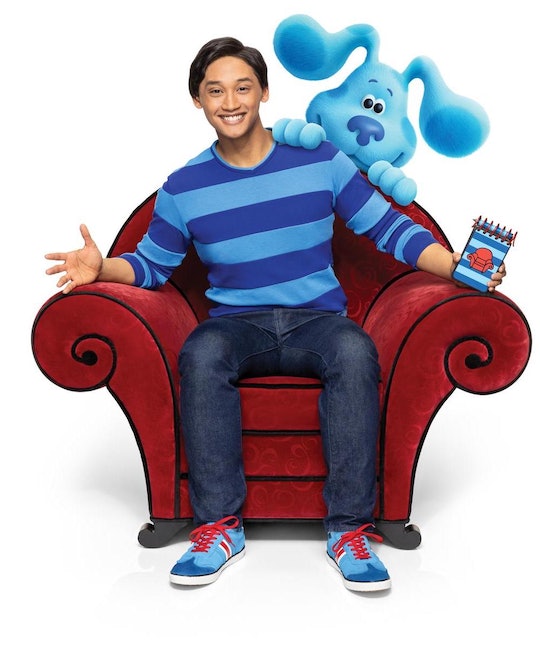 This Exclusive 'Blue's Clues & You!' Clip Reintroduces Some Old Friends

Blue's Clues is back, in a slightly different — but nevertheless familiar — form on Nickelodeon. The revival, Blue's Clues & You!, exclusively debuts three episodes on the streaming service Vudu on Sept. 27 before it officially premieres on Nick on Nov. 11. Blue's Clues & You! brings Blue back for new adventures, along with some old friends and a new host, Joshua Dela Cruz. You can see them all in this exclusive clip.

In many ways, the revived series is a lot like the original show. It follows a dog named Blue who leaves paw print-shaped clues on various objects to help her pal (owner? roommate?) Josh solve a puzzle. The level of audience interaction remains the same; there are gaps left in the dialogue so viewers can chime in and answer questions. The show still makes kids feel like they're part of what's going on. But there are a few technological updates, too.

This clip offers a glimpse at the new series, along with a hearty dose of nostalgia. In the episode "Playdate with Magenta," several fan favorite characters find themselves back on that beloved red couch. Blue's bestie Magenta is over for a visit, but when it comes time to take a photo together, several more friends pile into the frame. It doesn't look like Blue's Clues & You! has forgotten anyone.

The clip opens with Blue and Magenta bounding onto the couch while Josh walks by, with what looks like his Handy Dandy Notebook in his hands. Right away it's clear that the show is visually a little different, thanks to advances in animation since the original. But the vibe remains the same. Josh happily announces that it's picture time while Blue and Magenta act adorable in the background: they high-five their ears and tumble around just like the playful puppers they are.

Josh takes no notice of the explosion of cuteness behind him because he's focused on snapping a picture. To do that, he needs help from you, the viewer. He asks the viewer to hold his phone, which is when the update to the classic notebook becomes obvious. The notebook is no longer just a notebook, it also includes a handy dandy smartphone. Josh hands it over and the viewer brings it up to eye-level, so while you're watching it seems like you're looking right at the phone screen.

The pups are more than ready for their closeup, but when Josh tells them to move closer together, some other characters take the opportunity to jump into frame. Shovel and Pail arrive, with Mr. Salt and Mrs. Pepper joining soon after. The crew's all here! Josh excitedly gets them into position and encourages them to smile, at which point the viewer snaps the perfect shot. Then Josh asks Blue to take a picture of him with you, which she does using her ears. Unfortunately, you don't get to see how that one turned out.

The clip concludes with Blue using her ears to take a ton of selfies, because it's 2019 now and dogs know how to take selfies. Blue's Clues & You! has definitely been updated for a modern audience, but it seems to share its predecessor's fun spirit.

Blue's Clues & You! premieres on Nick on Nov. 11, with three episodes debuting early on Vudu on Sept. 27.