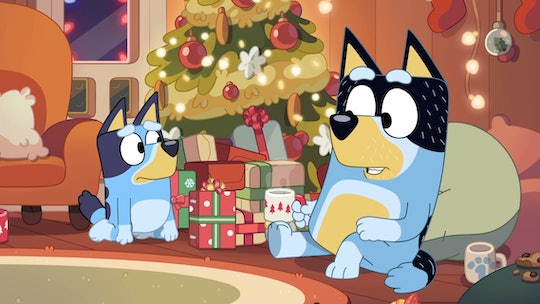 Mark Your Calendars: A Christmas-Themed 'Bluey' Episode Airs Next Week!

The holiday season means all the festive TV specials your heart could desire. And this year, the popular Australian animated television series Bluey has a special Christmas episode that finds everyone's favorite puppy celebrating with her family and making up lots of fun games along the way. And to help get you and your kiddos in the spirit, Romper has a special holiday Bluey clip not included in the Christmas episode. Jolly, jolly indeed!

Bluey — the animated kids' series that airs on Disney Junior for those in the U.S. and ABC in Australia — follows the adventures of a 6-year-old Blue Heeler puppy, her 4-year-old little sister Bingo, and her parents as they make fun out of everyday life. Dressing up in costumes and bringing her whole neighborhood in on the play, life is one big recess for Bluey. As for her parents, both are often exhausted from work but still manage to make time to play with their kids and get involved in the make believe.

In the special holiday episode — "Verandah Santa" — Bluey is on her best behavior in the hopes of earning more presents. But when a game of Verandah Santa, where the kids and dad take turns pretending to be Santa, leaves Bluey's cousin Socks unhappy, Bluey learns the true meaning of Christmas: kindness, compassion, and family.

Each episode of Bluey comes with a bit of a message for kids' to take to heart. The message of “Verandah Santa” is one of kindness during the holiday season, Joe Brumm, the show's creator, told The Sydney Morning Herald. "The format of kids’ television is often treated too factory-line like. To me, each episode is a chance to make a short film," he told the newspaper. "I try to put thought and originality into each episode and not just circle over the same things — the power of friendship and co-operation. I like to look at what gets in the way of that."

Along with re-airing the Christmas episode, Disney Junior shared an exclusive holiday clip completely separate from the show's regular Christmas episode with Romper. In this new clip, Bluey and her little sister Bingo can be seen in front of their decorated Christmas tree. While Bluey perches on the arm of a chair reading a book, Bingo plays with the controls for the trees string of lights. She alternates them between "on," "off," "really flashy," and "crazy" — among other settings.

Though a short clip, it's a fun glimpse into the holiday world of Bluey and the gang. And if that bit of Bluey leaves you wanting more — which, how could it not? — be sure to tune in to Disney Junior to view the Christmas episode.