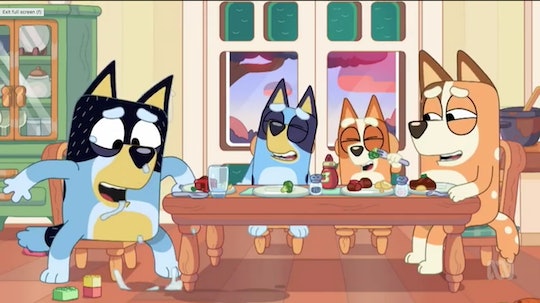 The Australian Broadcasting Corporation (ABC) has temporarily pulled two Bluey episodes over a complaint about "racial connotations." The episodes of the Emmy-award-winning Australian children's show were removed from the network's streaming platform after a viewer expressed concern that they contained language with racial undertones and "a problematic history for Indigenous Australians." The ABC has apologized and said it will edit the dialogue in the episodes to remove the language and return them to its streaming platform.

"A viewer complained that an episode of the animated children’s program published on iview included a term with racial connotations and a problematic history for Indigenous Australians," the ABC said in a statement. The term that sparked the complaint was reported by the network to be "ooga booga," a noun traditionally used in a derogatory way to denote how the person speaking interprets African or Indigenous languages.

Although the complaint, which was received June 28, referenced only a Bluey episode entitled "Teasing," a network investigation found the term in question was also used in a later episode entitled "Flat Pack." In both episodes the term is used by Bluey and Bingo as a nickname for their dad Bandit.

In a Bluey fan Facebook page, one viewer sought to further explain why the term is specifically offensive to Indigenous Australians. "I know to many you just see this word as ‘caveman speak’, or in the harmless way the writers clearly did too," The Brag reported one user shared in a Facebook comment. "But not everyone sees it that way. Including me. I'm in my 40's, and I well remember a time growing up in Western Sydney where the phrase 'Ooga Booga/s' was used conversationally to describe a dark-skinned person/s. It was used in social circles, in movies or TV depicting black indigenous people as 'uncivilised fools.'"

The ABC has since apologized for its use of the term and claimed they were unaware of its derogatory meaning. "The ABC sincerely apologized to the complainant for any distress caused by the term used in the episode titled ‘Teasing,’" a public statement from network read. "The ABC has a strong record for giving voice to Indigenous Australians and an ongoing commitment to helping reduce discrimination and prejudice and in this case, the language used was inadvertent. The complainant was advised that neither the ABC nor the external producers were aware of the potentially derogatory meaning of the term, which was intended only as irreverent rhyming slang often made up by children."

Both "Teasing" and "Flat Pack" were removed from The ABC's iview streaming platform so the network could edit the episodes' audio to include different dialogue before returning them to the platform and scheduling them for future broadcast on TV. While the edited version of "Flat Pack" is already available on iview, the edited version of "Teasing" is set to be re-released Sep. 8. In the U.S., the series airs on Disney Junior and is also expected to be edited.