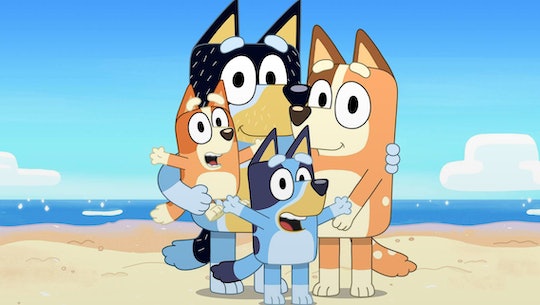 'Bluey' Is About To Be Your Kid's New Favorite Show

Every year there are a spate of new shows released on all of the kids' channels, and to be honest, I couldn't possibly remember the vast majority of what my kids are into. But that isn't the case with Aussie import, Bluey, which is just as much fun for the adults to watch as it is the kids. Kids will love the imagination of Bluey, and parents will be entertained with all of the inside jokes about parenting. But those aren't the only reasons why Bluey is going to be your kids' new favorite show (as some of the clips below will prove!).

The whole framework of the show feels fresh and fun. Bluey and her sister, Bingo, are being raised by two loving parents (Bandit and Chilli) who are willing to go the extra mile for their little blue heeler pups. Bandit is a stay-at-home dad and Chilli works, making the show a better fit for millennial parents than those portraying the "bumbling dad" stereotype.

Bluey is a huge hit with kids because they love watching the playful antics of the adorable puppies and their friends (Bluey: "I can kick my own bum!"), and parents love it because, in spite of the show being a cartoon about a dog family that walks upright, parents can imagine themselves in about every circumstance presented. (Too exhausted to move so you make a sleeping game? We have all been there.)

Debuting here in the U.S. on Disney Junior Sept. 9, the show is geared towards your littlest littles, but your older kids will likely be similarly hooked. Who knows? Maybe your kids will love it so much they develop slight Aussie drawls in the way of Peppa Pig fans gaining a little British poshness. (I might also develop one from watching anything a Hemsworth is in. It could happen.)

The thing young kids love to do best is play. To them it's as natural as breathing.

I was able to contact Bluey executive producers Charlie Aspinwall and Daley Pearson to speak with them about their process for the series, and why Bluey took the world by storm. The answer's pretty simple: it's real childhood.

"At the core of every Bluey story is a game, which is at least inspired by the everyday experiences of bringing up and playing with our kids," they tell Romper by email. "The thing young kids love to do best is play. To them it's as natural as breathing — it's how they explore and understand their world. We've tried to capture that and recreate those extended games, which can make vivid, surreal, and often very funny stories, especially when adults are dragged into the mix."

Bingo and Bluey are exactly as excitable and energetic as many of our own kids, and do all the normal kid stuff like speaking frankly about going to the bathroom, or falling into gibberish when being silly — the minutiae of kidlife that both kids and adults will recognize.

Aspinwall and Pearson say they set out to play to the whole room. "As a parent, having small kids bust in on you when you're on the toilet is a surprise at first, but it quickly becomes a fact of life," they say. "If these kind of moments make it into the show, it's because Bluey is observational and authored, and they are the kind of moments that make us laugh and that kids and grown-ups will recognize."

That basis in reality is so strong, that the show begins to feel aspirational at points (in a really good way). For instance, the puppies are never parked in front of an iPad, which is both refreshing and also requires significant suspension of disbelief. (Again, to be fair, these are talking dogs who drive cars, so it's not a huge leap.) I asked the producers if they were maybe concerned that they'd do their jobs too well, and inspire children right away from the television. And they prove to be just as grounded in reality as you'd think — they know better.

"Mum and Dad use their devices like any other family, but they understand the pitfalls and try not to do it in front of the kids too much," Aspinwall and Pearson say. "But as we all know, these devices are a very powerful distraction and kids can be very persuasive, so I don't think we're in any danger of losing our audience just yet. We've heard a few stories of Bluey inspiring kids to play with their parents once they have finished watching, so you've gotta love that!"

I agree with them 100 percent. Getting kids excited about something other than building virtual castles and watching kids unbox toys is a pretty great thing.

Be sure to tune into Disney Junior on Monday, Sept. 9, to catch the premiere. And get ready for the onslaught of play requests to follow — wackadoo!