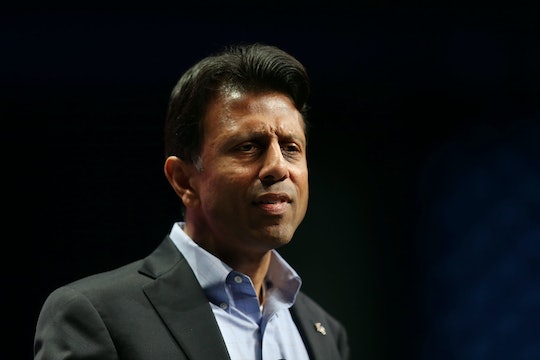 Bobby Jindal Drops Out Of The 2016 Presidential Race, Claiming That Now Is Not His Time

Jindal officially kicked off his campaign back in June, though he was quickly lost in the crowded GOP pool, while more well-known candidates including Donald Trump, Ben Carson, and Marco Rubio sped ahead in the polls. For the past few months, Jindal's own poll numbers have remained consistently low, which have relegated him to the "kiddie table" debate table in all four rounds so far. Low poll numbers haven't been the kiss of death for everyone, though — after all, we all watched as Fiorina's star turn in the second GOP mini debate propelled her into the big kids' arena. That was likely Jindal's hope, as well; but it doesn't seem to have panned out.

As political scientist Dan Birdsong told The Advocate in September: “Any candidate in that undercard debate is going to try to replicate Carly Fiorina’s model of being polished and strong." Unfortunately for Jindal's campaign, they just couldn't put together that same magic.

At his best, an NBC poll put Jindal in fifth place for one brief moment in October, where he tied with several other big names. But that bump in the polls was said to be after the Louisiana governor's campaign spent a considerable amount of time in the state of Iowa, and did not appear to last for long.

Jindal's sudden exit does bring about the obvious question that's on every voter's mind right now: Who's next to drop out? The GOP field is pretty packed with 14 candidates still left standing. One guess? Chris Christie may make the next announcement — the New Jersey governor has been polling low for a while, and was recently downgraded along with Mike Huckabee to the JV debate. Considering how little we hear from him these days, he too may decide that now is "not his time."

As for what's next for Jindal, the 44-year-old governor's term is up at the end of January, which means he'll be out of office pretty soon. While he hasn't yet shared who he might be supporting now that he's out, he did share with Fox that he'll be working closely with a think tank he started a few years ago, called America Next. There, he will devise "a blueprint for making this the American century" the AP reports — though he didn't elaborate on what exactly that means.

In a statement Tuesday, Jindal focused on his hopes and vision for the GOP party's future: "Going forward, I believe we have to be the party of growth and we can never stop being the party that believes in opportunity. We cannot settle for the left's view of envy and division."