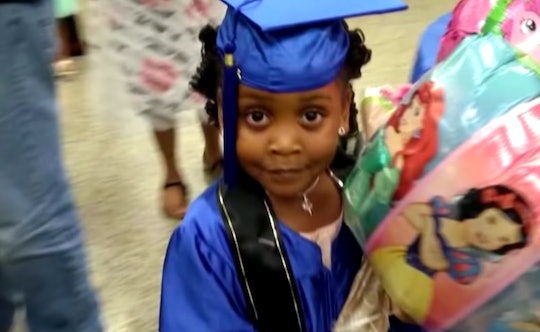 The family of a first-grader handcuffed by police and charged with battery for throwing a tantrum at school has released body cam footage of the 6-year-old's arrest in hopes it spurs support for a legislative proposal to establish a minimum age for arrest in Florida. While Florida does not currently have a minimum age for arrest, the Orlando Police Department has since fired the arresting officer on grounds he violated a department policy regarding the arrests of children under age 12.

Kaia Rolle was arrested in September by the resource officer at Lucious & Emma Nixon Academy after administrators reported she'd kicked and punched staff while having a tantrum. Footage shared with multiple media outlets, including the Associated Press and the Orlando Sentinel, by Rolle's grandmother showed the 6-year-old girl had calmed down and was sitting quietly with a school employee when officers arrived to arrest her.

When Orlando Police Officer Dennis Turner pulled out zip ties to use as handcuffs, Kaia can be heard asking what they're for. "It's for you," Turner responds before Rolle begins to cry.

A second, unidentified officer can then be seen placing the ties on Kaia as she sobs. "No, I don't want handcuffs on," Kaia can be heard crying. "No, don’t put handcuffs on!"

Kaia can then be heard pleading with nearby school staff. "Help me, help me!" she begs through tears.

"No, I want to stay in school," she can be heard saying when the two officers tell her it's time to go. "Please let me go."

The officers escort Kaia outside to a parking lot, where she is helped into a police car and seat-belted in. "I don't want to go in a police car," Kaia can be heard tearfully telling the officers as they walk outside.

"You don’t want to?" the unidentified second officer asks. "You have to."

"Please, give me a second chance," Kaia responded.

Footage shared by the Orlando Sentinel then showed Officer Turner return to the school's office, where he spoke with administrators and staff. When asked if the restraints they'd used on Kaia were "necessary," Turner said yes and that, "if she was bigger she'd have been wearing regular handcuffs."

"The youngest I've ever arrested was 7," Turner goes on to say. When administrators inform him that Kaia is 6 and not 8 as he'd thought, he touted her as his record breaker. "Now, she has broken the record," he said.

Meralyn Kirkland, Kaia's grandmother, previously told local CBS News affiliate WKMG that Kaia was taken to a juvenile center, where she had a mug shot and fingerprints taken. According to the Associated Press, state prosecutors announced shortly after Kaia's arrest that they had dropped the misdemeanor battery charge levied against her.

News of Kaia's arrest sparked debate and outrage nationwide and eventually led to Turner's firing. "The Orlando Police Department has a policy that addresses the arrest of a minor, and our initial finding shows the policy was not followed," Orlando Police Chief Orlando Rolon previously told News 6. According to the department, officers are required to obtain a watch commander's approval before arresting anyone under the age of 12.

Although Kaia's arrest is considered to be in violation of Orlando Police policy, it wasn't against the law as Florida is one of more than 20 states to have no minimum age for arrest, according to an editorial in the Orlando Sentinel. Kirkland, however, told the newspaper that, in sharing footage of her granddaughter's arrest, she is hoping to garner support for SB 578. The bill, which was filed in October by Florida state Sen. Randolph Bracy Jr., would make 12 the minimum age for arrest except in extreme circumstances.

Kirkland has told multiple media outlets that Kaia now attends a new school and has gone to therapy to help her recover from the trauma of her arrest.