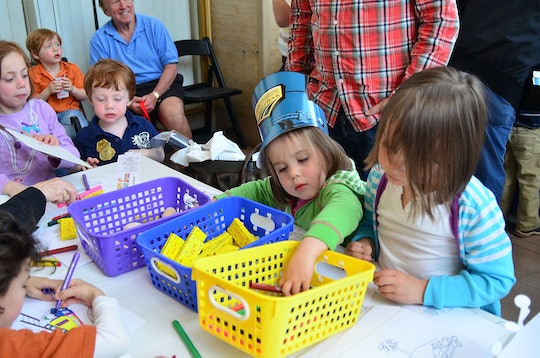 Body Image Problems Affect Kids As Young As 3, Which Is Pretty Alarming

Body image issues are a complicated thing to grapple with, but the problem might be more deeply rooted than anyone ever expected. A new study from the U.K.-based Professional Association for Childcare and Early Years (PACEY) has reportedly found that body image problems affect kids as young as 3 years old. It's no secret that toddlers are paying attention to almost everything that goes on around them, but the messages they're receiving can be really dangerous in ways we may not initially understand.

PACEY surveyed 361 childcare professionals— so the sample size was pretty limited — and found that one third of nursery school staff had heard a kid between the ages of 3-5 years old call themselves "fat." A whopping 10 percent reported hearing a child of the same age group say that they felt "ugly."

Those numbers double when they looked at kids between the ages of 6 and 10 years old. The results also showed that 16 percent of childcare pros had heard a toddler compare their looks to someone else and 19 percent had witnessed a child turn down a snack because they thought it would "make them fat." It's no wonder kids can't color within the lines — they're too busy worrying about their diet. That's a scary thought.

Dr. Jacqueline Harding, one of the advisors of the survey, said that the results show that kids are taking in a lot more messaging about their bodies than people originally thought. "By the age of three or four some children have already pretty much begun to make up their minds (and even hold strong views) about how bodies should look. There is also research evidence to suggest that some 4-year-olds are aware of strategies as to how to lose weight," she said in a PACEY release about the research.

That means that children are listening to adults shun dessert or make a comment about what they're eating — and they have already internalized the "rules." TV and other media, Harding says, also contribute to perceptions about their bodies, which is why the representation of all kinds of people, in all sizes and races, is so important for young children.

It's not so much the mimicking of adult behaviors that's troublesome but that the children "hold strong views" about what constitutes a good or bad appearance. If kids were worried about health that would be one thing, but it looks like they're strictly talking about their appearance and how others view them.

Concerns about body image can lead to depression or eating disorders later on in development and currently, most research is focused on children over 8 years old and teens, but this new research shows that the problems might start way earlier than that.

That means one very important thing: The solution to the problem may need to come earlier than that, too.