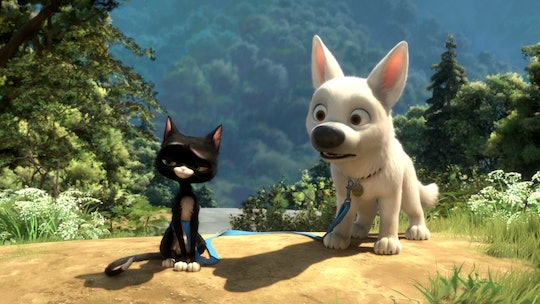 We have some very exciting news to share! As Netflix gears up to release it's full list of July 2018 titles coming to the streaming service, Romper can exclusively reveal one movie your kids are absolutely going to love. That's right, Disney's Bolt will be on Netflix start July 22. The digitally animated film tells the story of Bolt, a small white dog that has no idea he is the star of a television show. Bolt was released in 2008 with a PG rating, and now you and your family can watch it in the comfort of your own home.

Aside from being fun to watch, Bolt also has an all-star lineup as the voices of its furry animated characters. The one and only John Travolta voices the wannabe superhero dog, Bolt, while Miley Cyrus voices Penny. You will also catch vocal cameos by Chloe Moretz, Susie Essman, and Mark Walton.

While the action and adventure is fun to watch, Bolt also includes a heartwarming story for the canine and his friends. The message behind Bolt seems simple enough, so long as you're paying attention: you don't need to be a superhero to be, well, a superhero. Bolt learns the hard way that he doesn't have the super powers he thought he did, but that doesn't stop him from saving the day. This is a really great lesson for kids to learn, too, because they should always feel strong and confident enough to save the world if they need to.

Oh, and if you're a This Is Us fan you're going to like this little fun fact! Bolt was written by Dan Fogelman, the same man who created NBC's family drama, This Is Us. Small world, right? Fogelman co-wrote the screenplay for Bolt with Chris Williams who also co-directed the animated movie. Bolt aside, Williams has worked on a number of animated films like Moana, Frozen, Big Hero 6, and even 1998's Mulan.

Speaking of fun facts, both voice stars, Miley Cyrus and John Travolta, sang the title song for Bolt's soundtrack. As previously mentioned, Cyrus voices Penny, the little girl who is Bolt's BFF. Travolta voices Bolt, and the pair teamed up for the emotional but upbeat song, "I Thought I Lost You". They even filmed a fun music video for the song, which shows them jamming out inside a recording studio.

While Cyrus leads the vocals on "I Thought I Lost You", it's pretty cool to see Travolta singing again. Despite his role in the iconic musical movie Grease as Danny Zuko, many people seem to forget that Travolta can hold a note. In fact, he released two solo albums before the Grease soundtrack was released in 1978!

However, we must point out that "I Thought I Lost You" is the last time Travolta was featured on a single — or even in a music video. He's a featured vocalist on Olivia Newton-John's 2012 holiday album, This Christmas, but that's where Travolta's music career takes a pause.

Hopefully you are just as excited as I am that Bolt is coming to Netflix on July 22! It is definitely one of Disney's most underrated films, especially because it is just so enjoyable to watch. Bolt is the perfect pick for a rainy day pick-me-up while stuck at home when the summer weather isn't exactly perfect. Or, better yet, how about for family night in? Grab the microwave popcorn or have everyone make their own sundaes and then curl up for a good time.

Please note that the full list of titles coming to Netflix in July 2018 will be released on Wednesday, June 20.