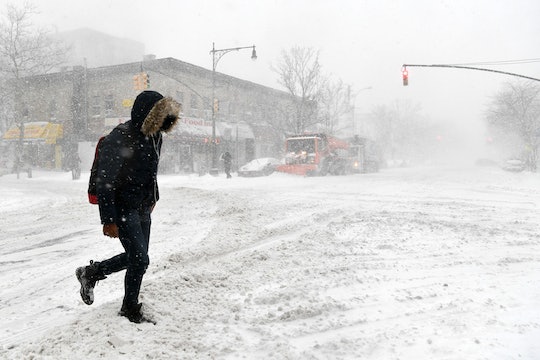 If you're in the contiguous United States right now, chances are you're experiencing ridiculous amounts of snow and wind right now, the likes of which you may never have seen before (if not, sorry about your earthquakes and wildfires, California). But just because your power's out doesn't mean you shouldn't spend the last 5 percent of your phone battery to send out bomb cyclone memes and tweets, because laughter is the best medicine for everything, even cabin fever.

Those in New England and the Midwest are hearty stock, and though the bomb cyclone may bring a few more inches or fallen branches than usual, they're used to horrible winter conditions, and it's up to them to put on a brave face for the rest of the country and poke fun at this wimpy storm (seriously, Grayson? They named it Grayson?). Even baffled Southerners are getting in on the action, marveling over the miracles of nature they've never heard of before, like water turning from a liquid into a solid. It's also spurred a nation of scientifically literate citizens to try and come up with a simple way to explain to their reading-averse president that climate change is real, and it's only getting worse under his policies. Let's dive in.

In all seriousness, this is a thing, guys. Before starting your car, be sure to honk your horn and give the neighborhood cats and squirrels a moment to clear out.

Whoever decided to leave the Parks and Rec social media manager on the payroll for nearly three years after the show ended, you have my undying gratitude.

And once the streets are plowed and the salt dries up, it'll look an awful lot like Crait.

Yes, other 49 states, we know what we sound like in Massachusetts, and we're fine with it. And just to get everything out in the open, we never cared for Ben Affleck, we're still on the fence about Matt Damon, Evan Peters does the best fake Boston accent, and we really do get iced coffee from Dunkin's when it's wicked cold out.

The number one sign that we're all completely transfixed by this storm: #BOMBCYLONE was the trending hashtag, while the correctly-spelled #BombCyclone was used almost exclusively by meteorologists and science magazines.

Good to see we've finally moved on from that tired Ned Stark pic. Why was that dude the face of the series for so long? He was only on a handful of episodes!

TBH, I really wish I could have seen that puppers make a U-turn around the patio table, but this is the next best thing. Let the poor thing pee in the tub.

There comes a time in every (Northern) adult's life when they have to make the grown-up choice between looking cute in the winter and being warm. Choose wisely.

Insofar as it's totally real, but Fox News refuses to admit it?

Too late, my friend.

If your uncle is still posting pics of snowbanks on Facebook as "proof" that climate change is a Chinese hoax, direct him to this four-minute long video for children, which explains the difference between weather and climate very simply. Or just tell him that weather is like a mood, and climate is a personality. For example, he's had his cheerful moments here and there, but overall, he's still a jerk.

Send the kids outside to reenact the Wampa cave scene!

If you have enough beer, you won't miss the TV at all.

Another FYI: whenever I see a post about snow from anyone in the lower two-thirds of the country, I think of that scene from King of the Hill where they got, like, three flakes, and everyone wrecked their cars.

What is it with the milk and bread? Everyone knows you're supposed to stock up on soup, batteries, and wine. Duh.