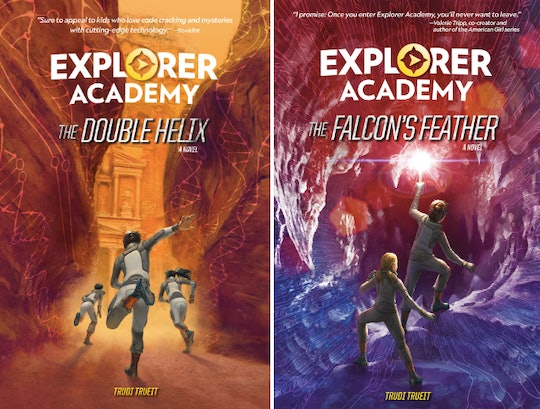 Young book lovers take note — National Geographic's new Explorer Academy books are coming out later this year, and they're full of high-tech, action-packed adventure. If your kid instantly became obsessed with The Nebula Secret, the first book in National Geographic Kids' recently launched Explorer Academy series, then they're going to want to check out the never-before-seen trailer below for the second book in the series, The Falcon’s Feather, and take a sneak peek at the cover for the third book, The Double Helix! — both Romper exclusives.

Before getting into how cool these new books are, here's a little background about Explorer Academy series, which is National Geographic's first foray into children's fiction. Written by Trudi Trueit, with a middle school-aged audience in mind, the seven-book collection was inspired by real-life science and exploration, according to a company spokesperson.

The series follows 12-year-old Cruz Coronado as he trains at the Washington D.C.-based Explorer Academy, alongside 23 other students, (including friends, Emmett and Sailor, both welcoming diverse) who hope to become next generation of great explorers. But the plot thickens when Cruz discovers a secret from his past that puts him at risk.

The series has been met with accolades from critics and celebrities alike. Famed film-maker and National Geographic Explorer-in-Residence, James Cameron, said the series, "Inspires the next generation of curious kids to go out into our world and discover something unexpected."

Now the much-anticipated second book in the series, Explorer Academy: The Falcon's Feather, will be released on March 19 for $17, according to a company rep. It is currently available for pre-order here. And fans are sure to be intrigued by the hints given in the trailer.

In Falcon's Feather, Cruz and his buddies embark on their first globe-trotting mission, aboard the ship Orion, and are met with real-world issues. Readers can expect a lot of "twists and turns" according to Trueit, the book's author, in an interview with Romper:

"I don’t want to give away any spoilers, but I will say they get to do something I have always wanted to do! Being away from their families, they have to grow up quickly, and learn respect, cooperation, and trust. One of the things that Cruz comes to realize is that, with each mission, he holds the lives of his friends in his hands and vice-versa."

One thing that's especially cool about the series is that it weaves real science and technology into the story thread. In Falcon's Feather, you see elements of what real-life National Geographic explorer, David Gruber, does in his work.

"Just as the characters in Explorer Academy work diligently to decipher whale communications, I am involved in a project that involves computer scientists, roboticists, marine biologists, and citizen scientists to better understand the sonic communication of sperm whales," Gruber tells Romper.

While that subject matter could be dense, the Explorer Academy serves it up in a riveting way that drives the plot forward. I can only imagine that after reading Falcon's Feather, fans of the series will be clamoring for the next book, Explorer Academy: The Double Helix.

While book three won't be available for purchase until September 3, 2019, readers can get a first look at the cover (above), to jumpstart their imaginations. And if you still need more Explorer Academy in your life, Trueit recommends visiting the Explorer Academy website, to read more about the characters and the science behind the series. You'll also find code-breaking games and a scavenger hunt on the site.

One thing is for sure, with a diverse group of characters, fast-paced plots and the latest science woven into the story, these books seem like a great way to encourage your own explorer to dream big.