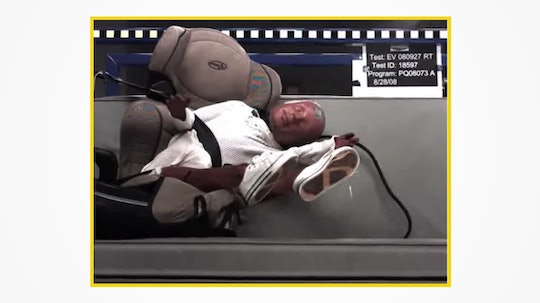 According to ProPublica, Evenflo continued to market its Big Kid booster seats as safe for children weighing as little as 30 pounds despite a safety engineer urging executives in 2012 to up the lowest recommended weight to 40 pounds. ProPublica's Daniela Porat and Patricia Callahan claim that, "Not only did [Evenflo] sell its seats for children under 40 pounds, but Evenflo touted its Big Kid boosters as 'SIDE IMPACT TESTED' without revealing that its own tests showed a child seated in its booster could be in grave danger in such a crash."

Evenflo eventually did change the minimum weight recommendations listed in the Big Kid owner's manual to 40 pounds in 2016, according to CBS News, but reportedly refrained from notifying customers already in possession of the seats as they felt there "was no safety impact related to the change." It's worth noting that Evenflo's online booster seat buying guide included multiple references to a weight minimum of 30 pounds and an owner's manual, with 2013 listed as the copyright year, Romper obtained from the Evenflo website still listed the minimum weight requirement as 30 pounds.

The American Academy of Pediatrics (AAP) currently recommends that children remain in rear-facing car safety seats "until they reach the highest weight or height allowed by their seat" as such seats are the safest way for children to ride in motor vehicles. "Fortunately, car seat manufacturers have created seats that allow children to remain rear-facing until they weigh 40 pounds or more, which means most children can remain rear-facing past their second birthday," chair of the AAP's Council on Injury, Violence, and Poison Prevention, Benjamin Hoffman, MD, FAAP, said in a recent policy update. "It's best to keep your child rear-facing as long as possible. This is still the safest way for children to ride."

Child safety seat recommendations from the National Highway Traffic Safety Administration (NHTSA), urge parents to keep children in forward-facing car seats with a harness until they reach the maximum weight or height limit allowed by the seat's manufacturer. "Once your child outgrows the forward-facing car seat with a harness, it’s time to travel in a booster seat, but still in the back seat," the NHTSA notes, estimating that could happen sometime between the age of 4 and 7. The agency recommends parents keep children in a booster seat until they are "big enough to fit in a seat belt properly."

When asked by ProPublica about three separate lawsuits brought against the company by parents who alleged Evenflo's Big Kid booster seats had failed to protect their children from serious injury in side-impact accidents, Evenflo General Counsel Amy Blankenship pointed to driver error. "In the lawsuits you mention, it is undisputed that significant driver error was the primary causative factor of the children’s injuries," she told ProPublica. In regards to the most recent lawsuit, which pertains to a 5-year-old who was internally decapitated in a 2016 side-impact crash while sitting in Evenflo's Big Kid booster, Blankenship claimed the booster had "performed as it was designed to do and did not cause" the child's injury.

In comments to ProPublica, Blankenship also stressed that the Big Kid booster seat complies with all federal regulations and that NHTSA allows for manufacturers to sell boosters for children weighing as little as 30 pounds. Blankenship further accused the nonprofit news outlet of seeking to "condemn an entire category of car seats successfully used by millions of consumers and which helped save thousands of lives in a myriad of crash scenarios."

Romper has reached out to Goodbaby International, Evenflo's parent company, for comment on ProPublica's report and crash test video.

Part of the problem, according to ProPublica, is that there are no federal safety standards for side-impact testing of child safety seats. While Congress directed the NHTSA to develop such government regulations in 2000, its implementation has repeatedly been delayed due to arguments from car seat manufacturers. As a result, Evenflo has been able to create its own definition of a passing grade for side-impact crash tests.

On its website, Evenflo states that its engineers developed "the Evenflo Side Impact test protocol," which the company reports simulates the energy generated in severe 5-star government side-impact tests. However, Evenflo does not divulge on its website how it determines how safe a car seat or booster is. According to ProPublica, however, the company allegedly views a test as a fail if the child-sized crash test dummy falls completely out of the booster and on to the floor or if the booster seat breaks into pieces.